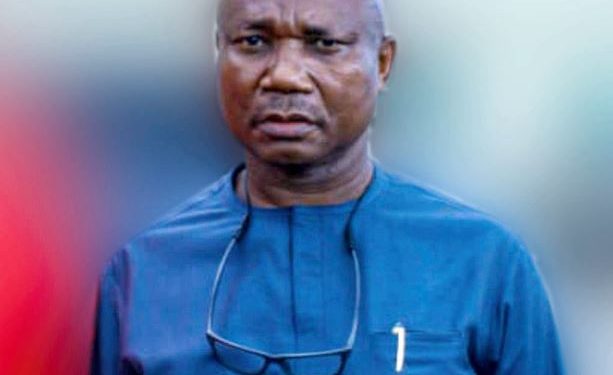 No doubt, the constitutionally recognized oil and gas bearing communities of Imo State, Ohaji/Egbema and Oguta, have been abysmally neglected, undermined and relegated to poverty, suffering and underdevelopment especially in terms of infrastructural facilities of electricity, good road network, quality and functional healthcare centres, schools, markets, safe and accessible water including youth and women empowerment.

Notably, Imo State Oil Producing Areas Development Commission (ISOPADEC) was established as a welfare oriented agency, but surprisingly, no meaningful project has been done at the oil and gas producing communities particularly at Ohaji.

This sheer socio- economic neglect was worsened by the Rochas Okorocha’s regime for 8 wasteful years, as he abrogated an established ISOPADEC Youth Scholarship Scheme which was sustained by Achike Udenwa and Ikedi Ohakim. Rather than sustain it, Okorocha was rather suspected to have encouraged the youths to indulge in political thuggery and violence especially when they were used to destroy the Eke Ukwu Owerri market. The rest is pathetically unheard of.

Regrettably, the Presidential Amnesty which the Shehu Yara’dua and Goodluck Jonathan regime gave to Niger Delta freedom and rights fighters did not adequately benefit the people of Imo State. It is possible the governor was allergic to youth empowerment and common good.

This was because the government of Imo State under Okorocha shortchanged the people with only 300 slots allotted to them whereas there were over 2000 of them who gave up their arms and surrendered same to government. It’s on record that Oguta people were the first set of freedom and rights agitators who surrendered their arms to government to give peace a chance.

Many youth from the hydro – carbon regions except Imo State were sent overseas: Canada, USA, Australia among others, on internship programs, where they were imparted with meaningful skills, some got solid academics who are today useful to themselves, families and their communities, but Imo State had a sorry tale.

It is only in Imo State where youths are not given bursary or sent overseas on meaningful skills by government with oil proceeds. Then where goes the 13% Oil Derivation Fund accrued to the State? The people are highly disappointed in the leaders who have continued to marginalise them, oppress them and prey on them.

One of the youth leaders of Oguta enclave who benefits from the Presidential Amnesty, pointed out that “the previous governments also did not pay bursary to students, youths, women and elderly, neither did they train them on useful skills home or overseas, as the case in Rivers, Delta, Bayelsa, Edo, Akwa- Ibom, Cross Rivers States”, frowning that the state amnesty which the Okorocha regime championed was a mirage as no dime was given to the boys who needed financial help more than his immediate family who had everything to itself.

Shamefully, in 2013 to 2014, the state government under rescue mission, rather managed to squeeze out #500,0000 to Ohaji/ Egbema and Oguta youth and tagged it youth empowerment funds.

This peanut was obviously mainly shared among the political cronies of the then government with tiny a fraction thrown at the feeble- minded youths who reluctantly grabbed it. No one meaningfully utilized the peanut. The Governor later challenged them to account whether any youth was empowered with the tiny fund. And no youth stepped forth to boldly say he was empowered with the fund. I stand challenged here.

Clergies ministering at the Niger Delta Region were among persons hired to look into the sharing of the fund, but it was fractionally, abysmally distributed as undue slots were allotted to highly placed individuals, maneuvering the rank and files. They are people who climb the pulpit preaching righteousness to their congregation, but did otherwise with the tiny funds thrown at them. Many young minds lost their lives jostling to have their own share of the fund. Quite shameful!

Little wonder, the former deputy Governor of Imo State, Rt Hon Gerald Alphonsus Irona, told a gathering in 2019 that “we must use ISOPADEC funds to develop our place. We shall end the era of sharing ISOPADEC funds. We shall take care of our women, youth and elderly. We shall touch the lives of our people. Our brothers shall no longer be used as thugs. We shall not steal your money”. This promise was never fulfilled because the Supreme Court acted abysmally using its powers that removed the incumbent governor..

In addition, the former ISOPADEC Managing Director, Anthony Okwuosha, in 2019, phrased that “ISOPADEC is a welfare oriented agency”, established to address infrastructural needs and economic welfare of the oil and gas producing communities. He decried “neglect, suffering encountered by the people of ISOPADEC in the past 8years”, saying the “government of Emeka Ihedioha is ready to address the suffering faced by workers”. But nothing was done by the regime before the Supreme Court uncharitably removed it, giving a dirty slap to true democracy which they swore to uphold.

Since the creation of the commission, successive governments had shied away from researching the obvious and immediate needs of the oil bearing communities, just as they had jettisoned developing the areas due to greed, hatred, wickedness, narrow- mindedness and incompetence.

The governor of Imo State, Hope Uzodimma, had told the world through the Commissioner of Information, Declan Emelumba, that ISOPADEC between 2007 and 2020 spent N12.3 billion which could not be accounted for or be substantiated.

A Vanguard Newspaper publication of August 3, 2020, quoted Corporate Development and Assets Management Limited (CADAM- ANE commissioned by Imo State Government), as saying “forensic audit report on financial records of ISOPADEC, revealed that between 2007 and 2019, the commission only spent N647 million, while between 2019 and 2020- within 8 months, a whopping N3.3 billion was expended with no trace of the projects for which the funds were used”.

And yet the previous government told the people that no penny was removed from the coffers of the agency for 8 years. Who is telling the truth here? Who is deceiving who? And yet the people continue to groan in agony of poverty and economic depravity.

Governor Uzodimma added that “out of a total sum of N3.5 billion of unexplained expenditure or online transfers of ISOPADEC funds to sundry- PAYEES- from inception in 2007 to January, 2020, N647 was spent between 2007 and May 2019, while the balance of almost N3 billion was spent between June 2019 and January 2020.

The report added that “payments to contractors were made without any guarantee, Advance Payment Guarantee (APG) or Certificates Earned and there was no project history, tender records or evidence of approvals from the board, as well as lack of adherence to existing protocols on award of contract above #1 million”.

These gory issues of mismanagement, misappropriation, misapplication and hijacking of ISOPADEC funds by rulers since creation, had retarded social development, welfare and wellbeing of the people of the State, who have continued to suffer from lack of electricity, bad road network, poor healthcare, poor education, unclean water and lack of standard market.

It is quite shameful and annoying that the people, who have been rendered to hardship by these cogs in the wheels of progress, have been keeping mute as though they were warned or threatened to remain dormant while they languish in mental slavery and economic penury. The people affected should rise to the challenging situation otherwise the leaders will continue to dehumanize them.

The past leaders were reputed to have carted away billions of funds belonging to the people and armed the youths with guns to kill themselves in cult wars as well as witch hunt political rivals. This is to enable them have their way and undermine the common good of the people who they are supposed to minister to their needs.
I advise the Shared Prosperity Government championed by Governor Hope Uzodimma to adequately use ISOPADEC money to develop the oil and gas producing areas and the entire Imo State. Imo State needs to be recovered, rebuilt and rebranded.

The Governor should always remember that judicious use of ISOPADEC money on people- oriented projects such as infrastructural facilities, scholarships, bursary payments to students (including youth, women and elderly), overseas internship training on skills, entrepreneurship, vocation and agriculture must be prioritized and intensified if his reconstruction, rehabilitation and recovering mantra of Imo State is anything to go by.

However, the newly constituted board of ISOPADEC led by a people- friendly man, Charles Orie, should tow the path of honour and positivity by using ISOPADEC money for the welfare and good of Imo people, especially the oil and gas producing communities.