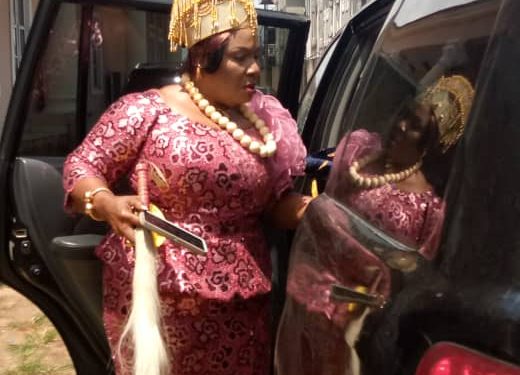 The former Governor of Imo State, Emeka Ihedioha has described Rotarian Ugoeze Edith Chinyere Ohanweh as a woman of virtue who cares for her family and others, saying she is a social person who produces positive result on every work assigned to her.

Ihedioha, who felicitated with Ugoeze Ohanweh on her installation ceremony as the 36th President of Rotary International Club of Aladimma Owerri held at Christian Association of Nigeria Centre, Owerri, last Saturday, described Ugoeze Ohanweh as a devoted human who fears God, as well as renders assistance to humanity passionately.

The installation ritual was carried out by immediate past President of the club, RTN Jerry Atuzie, who said it was a great thing handing over leadership of the club to RTN Ohanweh who he affirmed her investiture was propelled by her works, saying the club looks forward to working collectively in enhancing humanitarian services to reduce poverty, as well boost health of citizens.

Appreciating the club for finding her worthy for the position for 2021/2022 rotary year, Ohanweh promised to serve to change lives meaningfully. The club has plans to embark on many highly impactful humanitarian service projects that will positively touch many lives in various communities and our societies at large”.

Ohanweh stressed that “Rotary International is known across the world as a service – oriented organization. It preaches peace, provides clean and portable water to communities that need them, campaigns against diseases, as well as provides a wide range of services that make life more better and safe for people”, assuring she would do her best for the club, even as she thanked former Governor of Imo State, Emeka Ihedioha, for felicitating with her and the club.