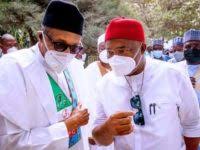 And so it all turned out that the much trumpeted visit of President Muhammadu Buhari to Imo State after all turned a huge drain pipe on the scarce resources of the state. In every way it is looked at it turned out a colossal failure except to the few warped mind who felt that Buhari’s presence was a huge political gain. This does not appear so in the eyes of right thinking Imo citizens.

Governor Hope Uzodimma cannot convince anyone sincerely speaking, that is if he ever speaks the truth that his almost a month stay at Abuja to lobby for the coming of PMB justifies the few hours the man spent in the state commissioning what can never pass for anything worth talking about when real projects are mentioned. I am sure Gov Dave Umahi would have laughed Uzodimma and his Imo people to scorn when he remembers the state of the art, world class project he is doing in Ebonyi.

Buhari is not known to have a knack for movements even for some important state matters. Little wonder political observers hold the views that huge sums would have been parted with to impress presidential aides to convince Buhari to accept the visit. Question is, what is so fantastic to warrant PMB coming to Imo when there is no federal project to commission.

PMB scammed by Uzodimma?
In what may have turned out a huge joke some comedians liken what happened in Owerri as the scamming of an Aboki President by a Hushpuppy governor. Their views are hinged on the assertion of President Buhari who claimed that he came because Uzodimma is a man of integrity. Indeed Buhari redefined integrity in Imo making us wonder again what integrity represents in the light of his description of the governor.

Would Buhari still say same if he realized that some of the projects he commissioned were the brainchild and handwork of previous governments? Was it Uzodimma that actually built the EXCO Chambers? Was the Egbeada bye-pass not a project commenced by the Ihedioha government? Would PMB still have declared his host a man of integrity if he knew that he once confirmed in a television that he became governor by doing a Ben Johnson to grab what does not belong to him?

Buhari said that he is impressed by what he saw? Question is what did he see? He saw only what he was allowed to see. Uzodimma would never allow him see how Imo has transformed to the dirtiest state in Nigeria. Should Buhari not have been allowed to travel a little distance along same road Poly/Ihiagwa road or visit the MCC-Uratta road or other parts of the state.

The verdict of PMB on Imo governor speaks volumes on his judgment and responses to issues affecting governance in Nigeria. If he can move guided from one place to another after listening to what they want him to hear and conclude that all is well with Imo we are not surprised why Nigeria is like this. If he eventually keeps his qualified promise of supporting the Imo government based on what he claimed he saw, then Uzodimma succeeded in scamming him through and through.

Did PMB realize that he was scammed? That Buhari realized that he was scammed was expressed in his parting words at the end of his speech. In his words, “Governor of Imo State, I cannot thank you enough, but I will be careful with your future invitations, thank you very much.’’ Buhari visited Imo but Imolites ignored him preferring to sit-at-home to enjoy their dot world.

Cost of hosting PMB:
I am not a good economist but when I reflect on the alternative benefits the huge resources that was used in hosting one man could secure for the state positively I weep for my Imo. It was a wasted jamboree signifying that governance is not happening in the state. Imo is a state where there are no checks and balances, no control on those who hold the levers of governance, no wonder the reckless unbudgetary spending etc.

When news filtered that over 700 million was expended for mobilization that never was what first hit me was, was this appropriated in the year’s state budget? I thought of how much values that can be secured if deployed to hold back flooding or fix even if a few kilometer of the road. This is only an item of expenditure; you can imagine the rest in terms of security and other logistics.

If the governor is sincere and truly accountable to the people as he claims can he open his books and let us have details of how much that was expended hosting the man who tagged us a dot in a circle. If Uzodimma and his team recognize prudence and shows concern for the plight of the people they would have used humongous sums applied hosting a president that never liked Ndi Imo to pay wages, clear refuse dumps that are impairing our health, fix our bad roads etc.

And we ask what value has Buhari’s visit added to Ndi Imo in any form. The host and the guest are two of a kind. Given the array of more qualified leaders they are the least qualified to merit the position the positions they hold. They are quite insensitive to the plight of their subjects, only concerned with their selfish agenda of just being in power. Uzodimma does not care how anybody feels about the visit, he may claim to have had the last laugh but Ndi Imo true to type drummed it louder they have no business with a man who has dispatched many of their youths to untimely death. The sit-at-home spoke loudest.

Ndi Igbo and Buhari’s visit
What did Buhari say to Ndigbo after that watery address by Prof George Obiozor, the Ohanaeze President? I can’t remember any. Earlier, we were deceived to believe he will have a talk with Igbo leadership. It turned out a ruse. Ohanaeze is funded and sponsored by the South East governors. He who pays the piper dictates the tune.

Obiozor is a product of Uzodimma. Can he say anything with an independent mind in the presence of his benefactor? Real Igbo leaders were clearly absent from the event and so was that another ploy to give credibility to the presidential visit? Only Umahi, another APC governor was the only South East governor that graced the occasion among a handful of few others.
Now that Buhari has come and gone can Uzodimma sit down and face governance in the state. Imo people are in urgent need of a lifeline.