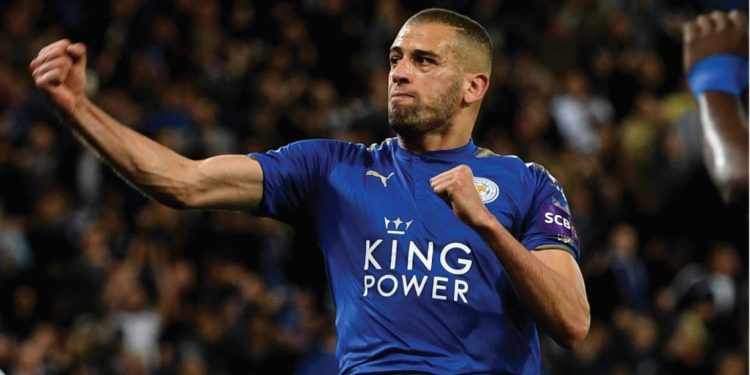 Algeria will be without Leicester City forward, Islam Slimani, and five other key players when they face the Super Eagles in an international friendly in Austria October 9.

Algeria replaced Ivory Coast, who pulled out of the friendly against the Eagles due to internal problems.

According to a report on African Football HQ, Algeria manager, Djamel Belmadi, will also be without Napoli’s Adam Ounas, Hicham Boudaoui, Youcef Atal, Djamel Benlamri and Youcef Belaili for their friendlies next month.

“Two players (Adam Ounas and Islam Slimani) from Algeria’s Africa Cup winning team are both expected to join new clubs before the close of the transfer window on October 5, so they are unlikely to be called up,” the report reads.

“Benlamri recently terminated his contract with Al-Shabab and Belaili is in talks with Egypt’s Al Ahly for a potential transfer, while right-back Youcef Atal, as well as Boudaoui, are ruled out due to injury.”
Meanwhile, the report also revealed that the absence of the quartet will give Belmadi an opportunity to test out some new players like Mohamed Tougai and Adem Zorgane.

The Eagles will also be without midfielder Wilfred Ndidi, who has been ruled out of action for 12 weeks after suffering a groin strain in Leicester’s Premier League win over Burnley September 20.

The Eagles will be heading into the game hoping to put an end to Algeria’s 18-match winning streak.
Algeria’s last defeat came almost two years ago in a 1-0 loss to Benin Republic in a 2019 Africa Cup of Nations qualifier.

Algeria have won 13 and drawn 5 matches, with wins over the likes of Senegal, Nigeria, Tunisia, Mali, and a 3-0 mauling of Colombia.

It will be the fourth time both teams will meet in the last two years.