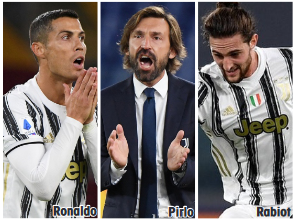 Juventus manager, Andrea Pirlo, has hailed Adrien Rabiot as “a complete player”.
According to Pirlo, he has “rarely seen someone so strong both physically and technically”.

Rabiot made his seventh Serie A appearance of the season as Juve beat Cagliari 2-0 on Saturday.
The result saw the Serie A champions move up to second in the league table on 16 points, one behind current leaders Milan having played a game more.

Cristiano Ronaldo scored twice within four minutes, but Rabiot was the architect of most of their best moments in the final third before being substituted for Weston McKennie.

“He is a complete player, I have rarely seen someone so strong both physically and technically,” Pirlo told Sky Sports of Rabiot post-match.

“He doesn’t even know the potential for improvement he can have, and we work on the mental side of things to make him understand that he is a champion. He is improving game after game.”

Sorry, Conte, Kante is going nowhere: Chelsea’s one truly world-class player is back to his best

Sorry, Conte, Kante is going nowhere: Chelsea's one truly world-class player is back to his best