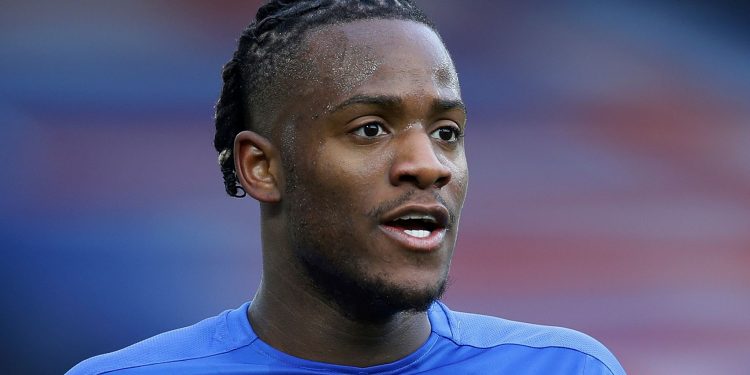 Michy Batshuayi accused Roy Hodgson of not trusting him amid a lack of game-time this season; the forward is on loan at Crystal Palace from Chelsea and his deal includes an option to buy; watch Everton vs Crystal Palace on Monday live on Sky Sports Premier League and Main Event from 6pm.

Batshuayi, who is currently on a season-long loan from Chelsea in what is his second spell at Selhurst Park, made the comments while away on international duty for Belgium.

After he scored in Roberto Martinez’s side’s 8-0 thrashing of Belarus, Batshuayi said: “I get a breath of renewed energy when I come into the national team, because it’s very hard for me at my club.

“The coach, the team members and the system are different from that at Palace. With the Red Devils, I feel a lot of trust from the coach; trust that I do not get there [at Palace].”

Prior to Palace’s clash in the Premier League against Everton on Monday, live on Sky Sports, Hodgson responded to the claims, issuing a warning to the striker for his choice of words regarding his lack of playing time this term.

“Then you expect him to say the type of things Michy said. If after 45 years I didn’t expect that or come to terms with that, I would have been living in a different world.

“But I would advise people that when they do go away and say that to be a little bit careful.

“Because playing 60 minutes against Belarus and scoring one of eight goals is not quite the same as if he comes on against Everton and helps them to a 3-0 win by scoring a couple.

“I would put that in a different league in terms of achievement. Without wishing to denigrate them in any way, the quality of a Belgian team against a Belarus team is not like two Premier League teams playing together.”

Batshuayi has made 16 appearances in the Premier League this season, scoring once and making two assists. The 27-year-old has featured just six times this calendar year and was an unused substitute in Palace’s last five top flight matches.

His loan deal at Palace includes an option to buy in the summer. The forward is one of a number of Eagles players whose contracts expire in a few months’ time, and his team-mate Andros Townsend has revealed that the group has been told that their futures at the club will be decided at the end of the season.

Hodgson’s contract also comes to an end in the summer, leading to suggestions that the 73-year-old may choose to bring his managerial career to a close.

Since moving to his parent club Chelsea from Marseille on a permanent deal back in 2016, Batshuayi has also enjoyed loan spells at Borussia Dortmund and Valencia. He has scored 25 goals in 77 appearances in all competitions for the Blues since arriving at Stamford Bridge five years ago.

With nine games remaining this season, Palace are currently 12th in the top-flight ahead of playing Everton at Goodison Park in their next game.

Uzodimma tasks board members on development