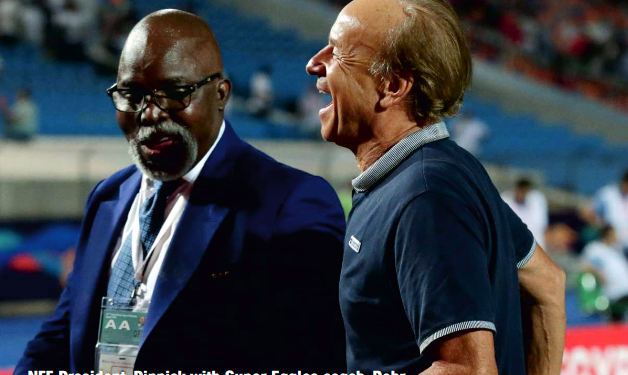 Determined to win next month’s 2021 AFCON qualifiers against Benin Republic and Lesotho, the Nigeria Football Federation (NFF) is leaving no stone unturned according to Super Eagles coach Gernot Rohr.

The Super Eagles will be away to Benin on March 22 with the final match of the qualifiers against the Crocodile of Lesotho in Lagos on March 30.
The German who was on a fact-finding mission to the March 30 match venue at the Teslim Balogun Stadium in Lagos over the weekend, said he had meetings with the NFF President Amaju Pinnick and 1st Vice President Seyi Akinwunmi who is also the Lagos State FA Chairman with a view to fine-tune arrangements for the two crucial games in March.

“I had meetings with President Pinnick and Vice President Seyi as well as an inspection of the Teslim Balogun Stadium,” the 67-year-old former Bayern Munich defender told newsmen.
Though details of the meetings were sketchy, it might not be unconnected with accommodation as well as flight arrangements and other logistics for the two crucial matches.

Incidentally, Rohr only last week hinted the Super Eagles must be ‘humble and focused’ in order to grind positive results from the forthcoming encounters, adding victory against Benin Republic is very important.
“We will try to do it (win) in Benin Republic because our opponents are very experienced with a lot of speed,” Rohr said in an interview with the NFF Media Department.

He added: “I hope to have everybody with no injury concern coupled with good travelling arrangements because I prefer all the players coming from Europe fly directly to Cotonou rather than going through Abuja or Lagos where they will be hoping to see their families.”
Meanwhile, Rohr is still keeping his list of players for the two encounters close to his chest, as he is still monitoring the players along with his scouting team in his bid to ensure the best legs are selected to prosecute the two remaining 2021 AFCON ties.