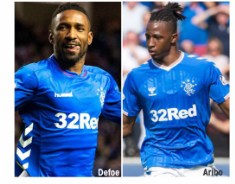 Rangers centre-forward, Jermain Defoe, has praised Joe Aribo after his impressive performance in their 2-0 victory over Livingston in Sunday’s Scottish Premiership game.
The Nigeria international started his first game for Steven Gerrard’s men since he suffered a muscle injury against St. Johnstone in August.

Aribo was ruled out of action for more than eight weeks before returning against Celtic, making a cameo appearance.
The midfielder also got some minutes under his belt in his side’s Europa League victory over Standard Liege before making a key contribution for Rangers during his 75 minutes of action at Ibrox Stadium.

Aribo opened the scoring in the encounter with a fine effort before Defoe sealed the victory for his 300th career goal.
The former Tottenham Hotspur attacker has hailed the impact of the Super Eagles midfielder on his full return from injury.
“I was raring to go and I prepared myself really well for the game and I knew when I got the opportunity, I would have to take it,” Defoe told the club website.

“Joe [Aribo] did well as well following a long lay-off with injury but it was a good win, and we are delighted.”
Aribo will be expected to continue his impressive showings when Rangers take on Lech Poznan in a Europa League game on October 29.

Reintroducing the concept of self-help in developing Igbo land