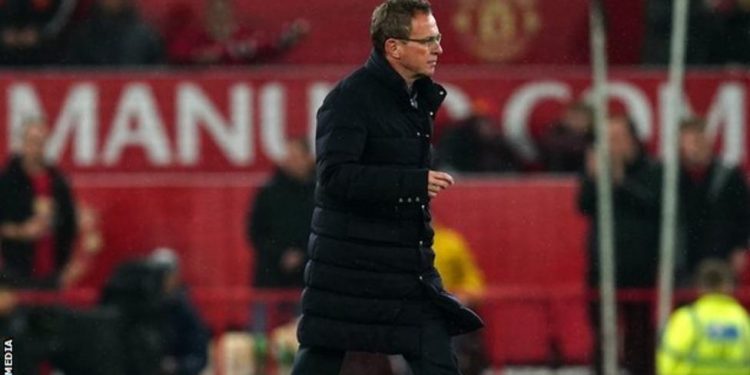 Manchester United interim manager Ralf Rangnick said he is not “completely happy” with his time in charge and admitted he had expected to lead the club to Champions League qualification.

The club are sixth in the Premier League and set to miss out on next season’s Champions League.

“In the end, I’m not happy with the results, especially in the past four or five weeks,” said Rangnick.

Former manager Ole Gunnar Solskjaer was sacked in November, with ex-midfielder Michael Carrick in charge for three matches before former RB Leipzig boss Rangnick took charge on an interim basis in December until the end of the season.

However, United, 20-time English champions, have had a disappointing campaign.

They lost at home to Championship side Middlesbrough in the fourth round of the FA Cup, went out of the Champions League to Atletico Madrid in the last 16 and are 25 points behind Premier League leaders Manchester City.

Summing up his time in charge, Rangnick said: “I’m not completely happy with those six months. I would have expected to qualify for the Champions League; that was the goal we had.

“We lost quite a lot of important players. From the team that won against West Ham [on 22 January], for the next game three players were injured. Other teams brought in players in the window.

“We had good moments, we conceded fewer goals but in the last few weeks performances have not been as good as they should have been. In general, we have lacked consistency.”

Rangnick, 63, is set to remain at Old Trafford in a part-time consultancy role next season, a job he will combine with his new position as Austria manager.

He will be replaced at Old Trafford by Erik ten Hag, who is moving from Ajax to take over in the summer.

Asked when planning with Ten Hag begins, Rangnick added: “So far we haven’t been able to speak. Erik’s focus is on winning the Dutch league, our focus was on our games.

“Other clubs only needed two or three transfer windows to challenge but from now on we need to bring in top-quality players who really help raise the level. If this happens, then I don’t think it should take too long [to become a major force again].”

Against Brentford, United’s side included midfielders Juan Mata, 34, and Nemanja Matic, 33, with both set to leave the club when their contracts expire in the summer. Paul Pogba 29, is also a free agent at the end of this season.

“It’s obvious quite a few players will leave and there is a need for top-quality players,” added Rangnick.

“I strongly believe if everyone works together we can bring Manchester United back to where we need to be.”