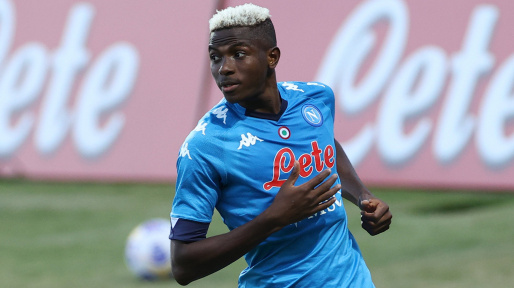 The 21-year-old returned from international duty injured and has begun physiotherapy at the Stadio San Paolo
Napoli centre-forward Victor Osimhen has intensified his recovery from a shoulder injury he suffered during Nigeria’s 4-4 draw with Sierra Leone in Friday’s Africa Cup of Nations qualifying game.

The forward spearheaded the Super Eagles attack in the encounter and found the back of the net to help Gernot Rohr’s men hit the ground running before the Leone Stars came from 4-0 down to share the points in Benin City.

Osimhen could not complete the game after he suffered a dislocated shoulder and was replaced by Genk forward Paul Onuachu.

The 21-year-old was allowed to return to Napoli following the injury and missed Nigeria’s second meeting with the Leone Stars in Freetown on Tuesday.

The Super Eagles failed to find the back of the net in the absence of the forward, playing out an uninspiring goalless draw, although the result was enough to see them continue their lead in Group L.
Osimhen underwent tests on his arrival at Stadio San Paolo to confirm the nature of his injury and has started treatment.

“Victor Osimhen underwent tests in Rome on Wednesday which confirmed that he has suffered a dislocated shoulder,” read a statement from the club website.

“The player has already begun physiotherapy on the injury and will be reassessed on a daily basis.”
It is yet to be seen if the forward will recover enough to feature in his side’s next league game against AC Milan on Sunday.

Electoral Act: Plus to democracy – Group