Onuachu sends message to Eagles coach Rohr with a hat-trick 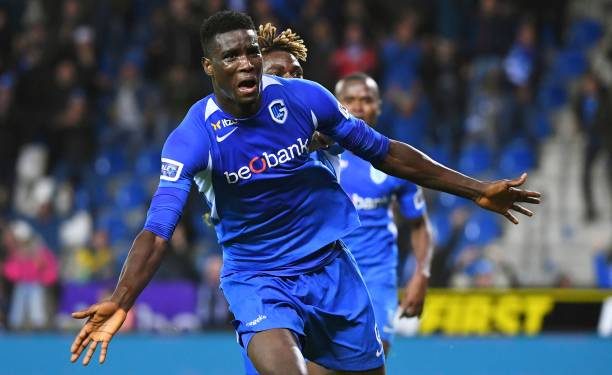 Paul Onuachu has vowed to continue to be at his best as he scored another hat-trick for Genk in their emphatic 4-1 victory over KAS Eupen in a Belgian First Division A encounter in midweek.
The Nigerian who has played in all but one of Genk’s league matches this season, extended his lead in the top scorer’s chart with 18 goals while his team closed the gap on leaders Club Brugge to a single point.

The 26-year-old Super Eagles star restored the visitors’ lead at the Kehrwegstadion just before half-time and he later converted two penalties after the restart to secure maximum points.
Nine minutes after grabbing his third goal of the night, the Super Eagles striker was replaced by his compatriot Cyril Dessers as Genk remained unbeaten in their last three outings in the Belgian top-flight.

With his latest heroics, Onuachu is still the leading Nigerian top scorer in Europe and he has equaled his best goalscoring return in a single season, when he scored 18 goals for Midtjylland in the 2016-17 Danish Superliga campaign.

Next up for Onuachu’s Genk is another league trip to Kortrijk on Saturday and they will be targeting another victory to boost their title chances.
They have gathered 38 points after 19 matches while David Okereke and Emmanuel Dennis’ Club Brugge lead by one point and a superior goal difference.
Nigeria coach, Gernot Rohr is already thinking about how to use Onuachu to achieve his aims and aspirations in the subsequent Super Eagles international matches.

Peace returns to Owaza community after killing of two soldiers