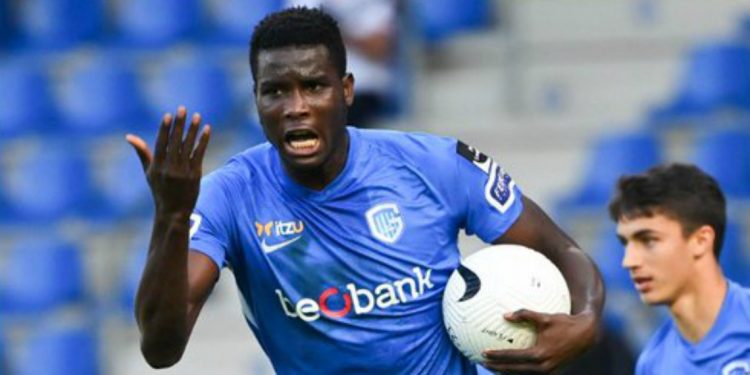 Nigeria internationals delivered impressive performances in front of goal to inspire the Blue and White to their seventh consecutive win.

Paul Onuachu grabbed his third brace of the season while Cyriel Dessers scored as Genk secured a 4-2 victory over Royal Antwerp in Sunday’s Belgian First Division A game.

Onuachu has been delivering eye-catching performances in front of goal in the current campaign and again shone at Luminus Arena.

The 26-year-old lanky attacker was handed his 12th start in 14 league appearances and scored his second consecutive brace.

Onuachu got his first brace against Mechelen in September and last weekend delivered similar performances against Cercle Brugge before registering his third at Luminus Arena.

The Nigeria international’s effort helped John van den Brom’s men to extend their unbeaten run to 10 games.
Genk found themselves on the back foot as early as the third minute when Koji Miyoshi opened the scoring for Antwerp.

Onuachu brought his side back into contention when he leveled proceedings with a fine strike in the 19th minute after receiving a timely pass from Daniel Munoz.

The Super Eagles attacker completed his brace in the 23rd minute when he beat goalkeeper Jean Butez to tuck home his 14th goal of the season.

Theo Bongonda scored the third for Genk while the Democratic Republic of the Congo international Dieumerci Mbokani reduced the deficit for Antwerp with his strike.
Dessers was brought on for Onuachu in the 82nd minute and sealed Genk’s victory six minutes after his introduction.

Besides his 14 goals, Onuachu has also provided one assist in the current campaign to help Genk maintain their top spot on the league table with 31 points from 15 games.
Onuachu teamed up with the Blue and White in the summer of 2019 from Danish club FC Midtjylland and has been turning heads.