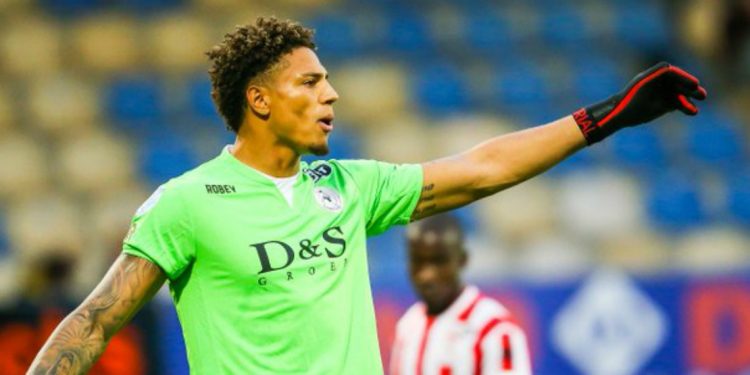 The Nigeria international has spoken about his role model and rated the Cameroon and Senegal goalkeepers
Sparta Rotterdam goalkeeper Maduka Okoye has revealed former Brazil international Nelson Dida as his idol and named Ajax stopper Andre Onana as the best African goalkeeper ahead of Chelsea’s Edouard Mendy.

The Nigeria goalkeeper has been delivering convincing showings for the Eredivisie side recently and is gradually becoming the club’s first-choice.

The 21-year-old has played six games in the 2020-21 season after joining the Dutch club from Fortuna Düsseldorf II in the summer.

Okoye’s recent showings for his club has also convinced Nigeria national team coach Gernot Rohr to trust him in goal for the Super Eagles.

Okoye has revealed where he gets his inspiration from and rated the Cameroon and Senegal goalkeepers, who are turning heads in Europe.

“Nelson Dida was my idol, for me, he was the greatest, I love his style but nowadays it is Marc-Andre ter Stegen,” Okoye told Voetbal Rotterdam.

“Andre Onana is also a great goalkeeper, I love to watch him. Definitely, he’s the best African goalkeeper at the moment. The second one is Mendy from Chelsea.”

Okoye has made five appearances for the Super Eagles since his debut against Brazil in a friendly in October 2019.

The 21-year-old also spoke of his delight to watch former international Vincent Enyeama and named him as the best Nigeria goalkeeper in history.

“I have definitely watched more of Enyeama because he’s more of my generation, I go with Enyeama,” he continued.

“For me, he is definitely the greatest Nigerian goalkeeper ever and also one of the best to play in the French League.

“Of course I know Peter Rufai but not as a person, I think he was the first Nigerian goalkeeper to play in the Netherlands with Go Ahead Eagles but I know more of Enyeama.”

Okoye will be expected to be in goal when Sparta Rotterdam take on Willem II in their next league game on December 13.