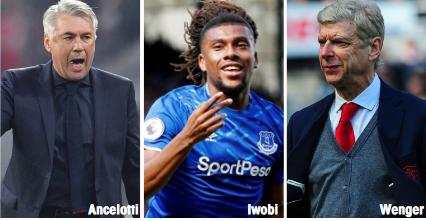 Nigeria and Everton midfielder Alex Iwobi has said there’s no difference between his former manager at Arsenal, Arsene Wenger, and manager Carlo Ancelotti.

The Super Eagles forward believes both tacticians are of the same ‘old school’ teachers on the field of play.
Iwobi has been at wing-back in recent games.

Speaking to talkSport, he said: “The way they trust their tactics is one of a kind, it’s almost like playing for the same manager.

“They both want the best out of their players, they give an opportunity to each and every player and the youngsters in cup games and use the whole squad, everyone is involved.

“It’s almost like playing under the same manager and the accomplishments speak for themselves what they’ve been able to achieve.
“I’m lucky to play under both managers.”

Why Araraume is right man for Okigwe Senate seat