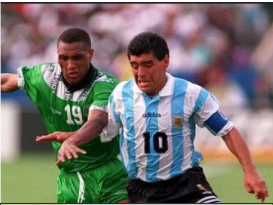 As sporting items linked with the legendry Diego Maradona are being are fetching the owners fortunes after being put on sale following the death of the Argentine, the shirt he wore in his last match would have been a stand-out in the various auctions.

Sadly, a Nigerian former international, Mike Emenalo would have been in possession of the prized shirt.
But he narrowly missed it. Sports Village Square recalls a story Emenalo told The Telegraph in UK some years back. The Nigerian international told the story of that June 25, 1994 match in which a Diego Maradona-inspired Argentina scored two goals in two successive free kicks by Claudio Caniggia to cancel the earlier lead Nigeria had had through Samson Siasia.

Argentina won 2-1. Emenalo had not realised at the time, but as he sat on a plastic chair outside the drug testing room in Massachusetts’ Foxborough Stadium – still in his kit, and totally exhausted – Diego Maradona was trying to tell him something.

Both had been randomly selected for the mandatory dope test. Hear Emenalo: “I was sat in the corridor with him and he [Maradona] was making jokes about it”.

“He had his shirt in his hand and he was looking at me. This was Maradona! I was just thinking about how I had a poor game. I was thinking I wasn’t going to play the next game against Greece.

“All the time he was looking at me. It wasn’t until I went home I thought, ‘He wanted to swap shirts’. Later when I got married I told my wife and she laughed. Can you imagine that last Argentina shirt? With Maradona’s sweat on it? I could have had that shirt in my hand!”

Emenalo was one of the Nigerian defenders that made life unbearable for Maradona in the match. While Emenalo passed his test. Maradona failed! Maradona tested positive for ephedrine, was sent home from the 1994 World Cup finals in disgrace and never played for Argentina again. That sweaty blue and white shirt would have been Maradona’s last national team jersey, and quite a memento.

I discovered myself after several unsuccessful job hunting – Onyinyechi Ajala