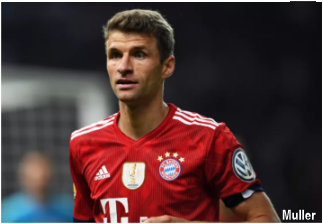 Thomas Mueller can further fuel appeals for him to be recalled by Germany when Bayern Munich launch their Champions League defence at home to Atletico Madrid on Wednesday behind closed doors.

Having managed a record 21 assists in the Bundesliga last season, Mueller has continued his sparkling form by scoring five goals and creating four more so far in 2020/21.

His latest eye-catching club performance has prompted fresh hopes of a Germany recall for Mueller, who was dropped by Joachim Loew from the national set-up in 2019 alongside Jerome Boateng and Mats Hummels.

Now Bastian Schweinsteiger has joined fellow former Bayern and Germany players Didi Hamann and Lothar Matthaeus in calling for Mueller to be reinstated.

“If I was national coach, Mueller as well as Boateng would be in the national side,” Schweinsteiger, 36, told Monday’s edition of German magazine Kicker.

Schweinsteiger helped win the 2014 World Cup in Brazil alongside Mueller, who knows he still has plenty to offer Germany after 100 internationals and 38 goals for ‘die Mannschaft’.

“Everyone can see that I am in good form. Let’s just see what happens,” Mueller told broadcaster ZDF on Saturday, yet Loew has so far showed no signs of reversing his decision.

Last month, Mueller became the most successful German footballer of all time — surpassing Schweinsteiger’s record of 26 titles — when Bayern won the German Super Cup as he lifted a trophy for the 27th time in his career.