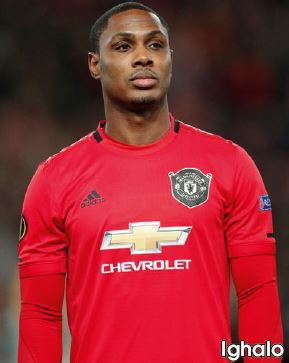 Manchester United striker, Odion Ighalo, says he hopes to get more playing time this season to help bolster his chances of staying at Old Trafford beyond January 31, 2021.

The former Nigeria international’s arrival from Chinese club, Shanghai Shenhua, in January raised eyebrows, but the 31-year-old responded with an impressive performance in the Europa League and FA Cup, scoring a total of five goals in eight matches.

Ighalo was offered another short-term contract in June owing to the outbreak of the coronavirus pandemic.
Since the return of football in England in June, the former Watford player has played a miserly 17 minutes, but in a video posted on Twitter by BBC’s Mimi Fawaz, Ighalo said he hoped to get more playing time to help improve his chances of getting a new contract.

He said, “As long as the team is winning and doing well, that is the most important thing but I hope to get more playing time this season.

“It’s my darling team, I’d like to stay but that does not depend on me, it depends on what I do, how I work and people up there but for now I don’t want to think about that.

“Now it’s for us to start the season this weekend, we grind from now till whenever.

“It’s a club I supported from when I was young and I’m always grateful to God that this is my dream and I’m living it and nothing else matters.”

Police Brutatlity, Abuse, and Hatred of Asylum Seekers and Refugees in Belgium