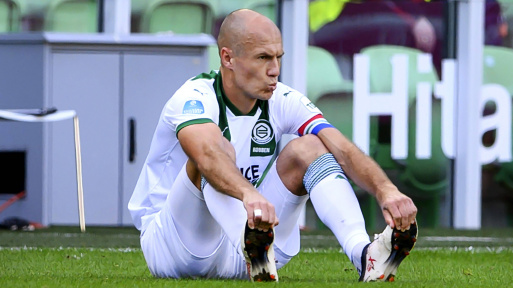 Former Netherlands international Arjen Robben’s comeback has been delayed until next year as the 36-year-old continues to battle with injury, but he is still hoping to play this season.
Robben’s much anticipated return to his home town club FC Groningen has proven a disappointment as he has played just 44 minutes in two appearances in the Dutch league this season.

He has struggled with hamstring problems and now has a calf injury.
“It is not yet going as I would like,” he told his club’s website.

“We have worked hard in recent months, but unfortunately without the desired result.
“I will use the rest of the year to recover and would really like to be on the field with the team in the New Year and play matches.

“Whether this will work, I cannot say yet. That we’ll see in the coming period. Although my own situation has been disappointing, I am happy that our team is doing so well.”
Groningen are eighth in the 18-team table, 10 points off the top.

Robben has a long history of injuries but still won 12 league titles in his career at PSV Eindhoven, Chelsea, Real Madrid and Bayern Munich before retiring at the end of the 2018-19 season.

In June, he announced he had changed his mind and was making a return at his local club, where he had debuted as a professional while still a teenager.
However, he went off in the first half of the opening league game against PSV Eindhoven in mid-September.