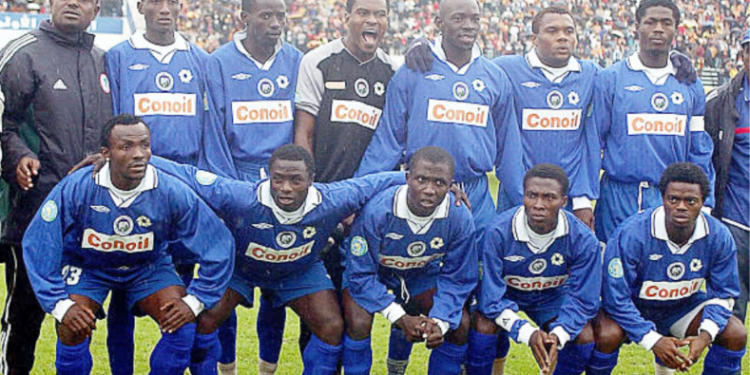 Enyimba of Aba were on the throes of relegation when Dr. Orji Uzor Kalu was elected as the executive governor of Abia State in 1999. Kalu swiftly beckoned on Felix Anyansi Agwu who had just emerged as the chairman of the club and charged the delectable new Aba team boss to do all he could to pilot Enyimba out of the troubled zone.

Hard working but little experienced Anyansi heeded to the governor’s clarion call. He mobilized men, money and materials and Enyimba escaped relegation by the whiskers in 1999. In the 2000 football season, Anyansi gathered some of the best local players and coaches and the team was made strong. Enyimba were made great, attractive and exciting. The team got ready for the next season and, the once struggling People’s Elephant subsequently became national and continental champions.

In this way achievements followed. Beginning in 2001, with the late Coach Kelechi Emetole, Enyimba won the Premier League title after a Super Four play off at the National Stadium, Lagos. After the league success, Emeteole also known as Caterpillar, left. Godwin Uwua who replaced him retained the diadem in 2002 and in 2003 Kadiri Ikhana still made it happen for Enyimba thereby recording a triple(2001 -2003).

In 2003, Ikhana, in Enyimba colours, became the first Nigerian coach to lift the CAF Champions League which the sporting press had dubbed elusive. In the semi final game against US of Algeria, Enyimba got a vital 1 -1 draw away and celebrated it as if the tournament had been won. However, in the return leg tie in Aba, the North Africans shocked Enyimba and their fans when they went up early in the first half.

The Nigerian champions struggled to level up at stroke of half time whistle. Throughout the second 45 minutes Enyimba got everything wrong and played into the hands of US who were now wasting every second relying on penalty shoot out.

Meanwhile, there was a free kick for Enyimba late into the injury time when substitute Ekene Ezenwa was brought down near the box. Right full back Mohammed took a diagonal pull out. Workaholic striker, the late Michael Ochei, went up, and against the law of friction, refused to go down until he had a head contact with the ball and that was the winner.

Enyimba were in the final which they won 2 – 1 on aggregate. Thus, Enyimba were the first Nigerian team to bring the trophy home in 39 years. Anyansi made it possible and then Governor Orji Kalu financed and inspired the team. Remarkably, Coach Okey Emordi, one of the most experienced tacticians in the country, took Enyimba, once again, to the pinnacle of African football in 2004 when he won the trophy back to back for Enyimba and Nigeria.

It was not an easy affair. In the elimination series, a team from Angola known as Petro Athletico, came to Aba and got a deserving away draw. Based on the strength of the Angolans, it was concluded that it was over for the defending African champions. However, during the reverse fixture, Enyimba’s mesmerizing sub striker, David Tyavkase did the unexpected and shocked the host with an away goal.

In the final, Enyimba defeated a Tunisian side to lift the trophy back to back. Since then, Anyansi has led Enyimba to eight league and five Federation Cup titles. Anyansi and Enyimba are jinx breakers while the motivator, Orji Uzor Kalu, is the man with a Midas touch. It is imperative to note that before Enyimba’s CAF Champions League glory, various Nigerian league teams had campaigned in the elite club competition without success.

In all, three teams made it to the finals but crashed. Rangers International of Enugu was the first Nigerian side to qualify for the final of CAF Champions League in 1975, just five years after the civil war. Rangers were exceptional as they played to the final but lost to Hafia of Guinea when the national FA refused them playing at Enugu. Twice, Shooting Stars of Ibadan played in the final against Zamalek of Egypt in 1984 and 1996 and twice lost to the North Africans.

Heartland then known as Iwuanyanwu Nationale were really enterprising in 1988 and made it to the final. Facing Setif of Algeria in the final, the NFF, just like in the case of Rangers in 1975, never allowed Heartland to play in Owerri. They played in Ibadan and scored just one goal. In the return leg in Algiers, playing before a hostile crowd and harsh weather conditions, Heartland, with Friday Ekpo sent out and Oliha injured after statutory substitutions, finished the game 9 against 11 and lost 4 -0.

Up Enyimba for breaking the Champions League jinx. This is one of the glorious moments of the past when a Nigerian team made waves.