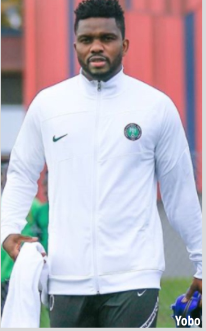 Joseph Yobo has stressed the importance of Nigeria beating Sierra Leone at home when they face off in an Africa Cup of Nations qualifying game on Friday.

The Super Eagles will square off against the Leone Stars at Ogbemudia Stadium before the reverse fixture in Freetown on November 17.

The three-time African champions are leading Group L with six points from two games after victories over the Republic of Benin and Lesotho.

Yobo, an assistant to Nigeria coach Gernot Rohr, believes the Super Eagles must take the home tie in Benin City seriously, as it could go a long way in deciding their qualification for the continental showpiece.

“These are big games. There’s a difference between friendly matches just like the ones we played, [against Algeria and Tunisia],” Yobo said on the Super Eagles YouTube channel.

“It was experimental where we gave younger players the opportunity to show themselves. But this is a qualifying match where if we do well in both games we will almost qualify for the AFCON.

“We expect big performance and very good results. If we have to do the mathematics, I think four points will get us through. But when you play at home, it’s crucial, it is so important to play very well and to take the three points.

“Away from home we know is always difficult especially Sierra Leone. If I can remember the last time, we were away to Sierra Leone was 2008 and it was very difficult, and I scored the only goal. So, it’s a difficult place to go to but football has also changed so the first game is what is important.

“I try not to bother much about the second game. All we have at this moment is the first game so we need to play very well, and our performance will get us the three points.”
Yobo had his first experience as a Super Eagles assistant coach when Nigeria played Algeria and Tunisia in international friendlies last month.

The 40-year-old revealed his delight to return to the Super Eagles after starring for the side for 13 years, winning 101 caps.

“It was good. One thing was that after my career I stayed away because I played for 13, 14 years and I wanted that break. So, coming back was refreshing for me because most of the players haven’t seen me,” he continued.

“I think it was a very good thing. And coming back as a coach and not as a captain or player anymore is a different ball game.

“We have the head coach, Gernot Rohr that is there and his team. For me, it was like a family. It was like I never left, even easier than I thought because when I got on to the pitch and into the mood of playing and coaching, the natural things I needed to do started coming out.

“So, whatever I do came out naturally and I think it’s because of my love and passion for the national team.”

‘It was so scary’: American describes getting to Kabul airport after Taliban takeover(VIDEO)