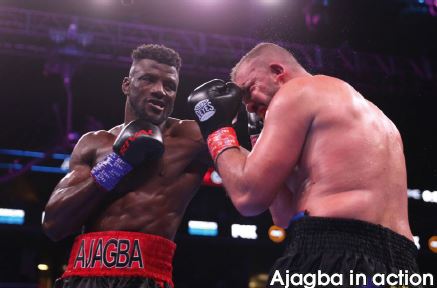 Nigeria’s heavyweight boxing sensation, Efe Ajagba, improved his unbeaten boxing record to 14-0-11 with a unanimous decision win over Johnnie Rice on Sunday despite fighting with an injured elbow.

The fight is Ajagba’s debut for new promoters Top Rank, after spending three years with former promoters Ringstar Sports and going unbeaten in 13 bouts, with 11 knockouts.

Ajagba scored big on the judges’ cards in the fight. Judge Max DeLuca had the bout 98-92, while judges Adalaide Byrd and Dave Moretti scored it 99-91 in favour of the heavyweight prospect.

The 26-year-old Nigerian landed 131-of-406 in total punches, far exceeding the pedestrian effort of Rice, who had just 39-of-269, according to Compubox, in a dominating but lukewarm debut.

That fight saw Ajagba fight through an injured elbow for much of the night, with the 26-year old heavyweight reportedly injuring his right hand earlier in the rounds.

It means Rice suffered his second straight defeat in 2020.

The 33-year-old was stopped in the 10th and final round of a March 7 clash versus Demsey McKean. Both losses have been to undefeated opponents.

This is the second time Ajagba has gone the distance, a lesson the boxer says he has learnt from as he focuses on his next bout.

He wrote on Instagram after the fight, “My second time going the distance, a valuable lesson learned. Improving on to 14-0, I’ll be back soon!!”