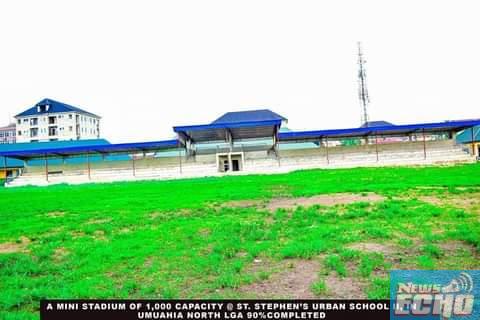 A 900 popular stand -capacity and 100- capacity VIP stand stadium with a standard pitch and goalposts being constructed by Speaker of Abia State House of Assembly, Hon Chinedum Orji will soon be completed and handed over for use by the Speaker. The sports facility which is being built at St Stephen’s Anglican Church field at Ward 2 part of Umuahia North LGA, is aimed at raising future sports champions in Abia State, particularly from Umuahia. In a recent interview with the Chief Press Secretary (CPS) to the Speaker of Abia State House of Assembly, Jude Ndukwe, he explained that Abia State Speaker had earlier before now, completed a mini stadium at Isieke Ibeku also in Umuahia North which is presently a raising ground for future Kanu Nwankwos, Jay Jay Okochas and Chioma Ajunwas.

He equally noted that the Speaker, who is the candidate of PDP for Ikwuano/Umuahia federal House of Representatives, had already completed water, roads, transport and educational projects for his constituents in Abia State House of Assembly before his House of Reps aspirations. The Ward 2 stadium has changing rooms with conveniences specially designed for the Home and Away teams, the rooms can also serve as a holding space for none soccer events. The project, according to the contractor handling it, is to be completed by December this year.

Similarly, the Speaker of Abia State House of Assembly, Hon Chinedum Orji who is the PDP candidate for Ikwuano/Umuahia federal constituency has donated 3 Toyota Sienna buses to his local government House of Representatives campaign coordinators. Presenting the buses to the coordinators from Ikwuano, Umuahia North and Umuahia South, the Director-General of Ikukuoma campaign organization, Pastor Emeka Inyama charged the coordinators to deliver on their mandates. The campaign DG expressed the confidence that the PDP candidate would be elected by the people and pleaded with Ikwuano/Umuahia electorate to identify with the candidate for more dividends.