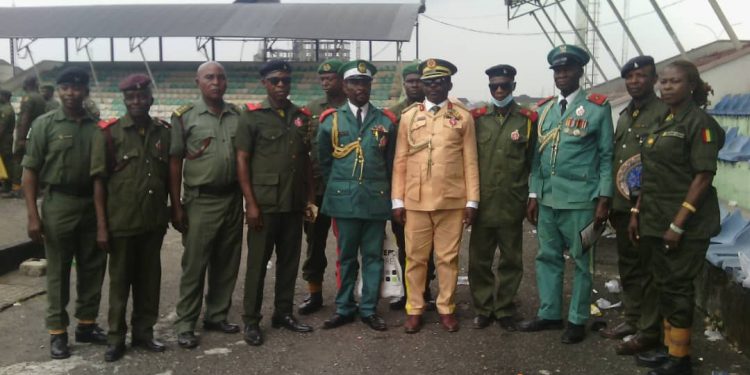 0
SHARES
64
VIEWS
Share on FacebookShare on TwitterShare on Linkedin

The Nigerian Legion also known as Ex- Service Men, has stated that good leadership is key to solving security issues bedeviling the country.

Anyanwu maintained that when politicians who cardinally control economic and political power of the nation attach godliness in politics and governance, there will be employment, empowerment opportunities which will in turn draw, as well as advance, value and development with crime and violence being nipped at the bud, calling on all wealthy and influential people to help the society since government alone cannot meet the infrastructure needs and welfare of citizens most of who he said produce wealth of the state.

He advised “political leaders to do the needful to curb security challenges dampening society. Sincerity of purpose is the only solution to insecurity bedeviling the country. The Nigerian Legion is urging government to appreciate us because we paid supreme prizes to protect the country to see continuous reign of peace and joy”, lamenting that the legion has been financially neglected by government, decrying the rate of poverty widows of the fallen armed men have degenerated due largely to government complacency and abandonment.

Stressing that security of life and property of citizens is very important in every society that believes in humanity and strives for economic independence for all citizens, Director- General, Bureau for Peace and Conflict Resolution, Imo State, Amb. Engr. Peter Ohagwa, observed that “without security, there will be no peace and without peace, there will be no meaningful development. And as such, government should prioritize security, provide all it takes to fight insecurity to standstill to the army and other security outfits to project security and restore sanity, calmness, orderliness and comfort”.

Earlier, Governor of Imo State, Hope Uzodimma, who performed the ritual of wreath laying (plaited decorated flowers and leaves) on the spot where a fallen soldier was moulded, applauded the armed forces whether living or dead for paying supreme prizes to maintain peace and calmness in the nation, saying government will do its best to encourage armed men to strengthen security and peace in the state.