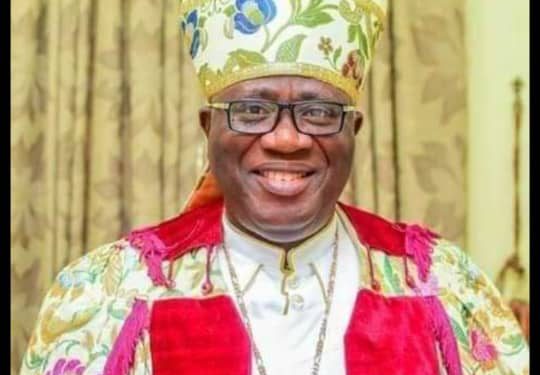 The Prelate of Methodist Church Nigeria, His Eminence, Dr. Samuel Uche, said that greed, corruption and wickedness by the ruling class are the major cause of insurgency and insecurity in the country, regretting that those factors give room for oligarchy and dictatorship.

He said craze for political power by politicians with the ulterior motive to syphon or possibly drain the economy of government and thereby creating hardship, unemployment, poverty, underdevelopment is the cause of problems of the state, calling for good governance, including quality infrastructure in order to defeat poverty, vulnerability, underdevelopment and insecurity.

In an interview with media professionals on the official inaugural meeting of Imo State Elders Council, held at the Concorde Hotel, Owerri, last week, the Prelate frowned that failure of federal government to fix youths on meaningful activities is the cause of insecurity bedevilling the country.

“Failure of federal government to fix the youth productively is what metamorphosed into insurgency: boko haram, ISWAP, Fulani herdsmen, unknown bandits. When youths are adequately employed and everybody is economically comfortable, there will be few criminals. But the thing has gone round because people do not have food on the table and that has caused a lot of trouble”.

On incessant ritual killing, the Methodist Prelate stated that the way forward is for parents to train their children in the way of God, so that when they grow old the would live uprightly, pointing out that such anomaly is rampant today due largely to craze for wealth and fame. “Parents have failed in the upbringing of their children. Everybody has failed. Can you imagine, children of 12, 13 and 15 years, killing their girlfriend for ritual and dismembered her, which means the love is fake”.

The Prelate was bitter about the social, economic and political marginalisation of Igbo by federal government, a neglect he argued gives rise to IPOB agitation on the restoration of Biafra to independence and legitimacy, urging federal government to quickly and unconditionally release Mazi Nnamdi Kanu.

“Nnamdi Kanu, I would not want him to be detained unnecessarily. I want him released unconditionally. And it will be negotiated. I align myself with my Bishop, Bishop Sunday Onuoha and Amb. Chief Amaechi Mbazuluike, who told federal government to give us MNK and we will advice him, but then stop marginalisation of Igbo people that is what caused the problem.

How can you have five chief security officers, heads of customs and immigrations and no Igbo is among. You cannot govern like that in a democracy. I’m aggrieved, but I cannot take up arms. I believe that those issues can be negotiated at the round table”, Uche stated.

Being a patriotic citizen and a member of Imo State Elders Council, the Prelate said he joined the forum because of his interest to efficiently contribute to the peace, social, economic advancement, wellbeing of the people, noting the council is beyond political, religious or social inclination, saying the interest of people should be Imo and who does well to improve welfare and wellbeing of citizenry, not who governs the state.

The Art of War by Sun Tzu