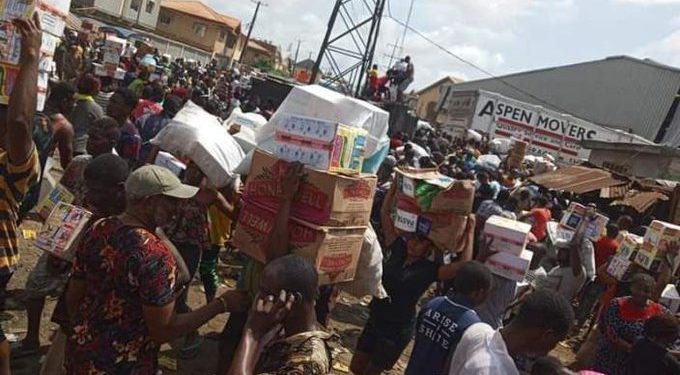 Those who are in police custody across the country for their involvement in the rioting and looting that followed the mindless shooting of genuine protesters at the Lekki toll gate, may be concerned that the Minister of Power, Alhaji Mamman Saleh, is also not in custody, despite his alleged attempt to divert 20 rural electrification projects, to his local government, through the proposed 2021 Rural Electrification Agency’s budget.

I haphazard an answer. First, is that Mamman Saleh is a ‘big man’ and a minister for that matter, and perhaps one of the favoured sons of President Muhammadu Buhari, and as such is immune from the long hands of the security agencies. Second, is that he could say, he merely attempted to do so, without violence.

Luckily for other rural local governments, the Senate Committee on Power and Rural Electrification has vowed to stop his unconscionable attempt to site 20 projects in Lau Local Government Area of Taraba State, where he hails from.

According to the senate committee, while Mamman Saleh sought to locate 20 projects in his local council, only one of such projects is sited in the entire south-south part of the country.

To show how reckless and mindless Saleh’s attempt was, even Senator Yusuf Yusuf, from the same state, representing Taraba Central Senatorial District, strongly kicked against the unconscionable budget proposal.
As reported, Yusuf urged his colleagues to look closely at the proposed budget. He said: “It is not just the N52 million, but if you look at from number 85, N30m, N20m, N40m and they are all concentrated in one Local Government Area.

” He went on: “That is the minister’s LGA. Twenty projects are in the Lau Local Government Area. I am not challenging him, but I am sure”. Another member of the committee, Senator Bala Ibn’Nallah accused the minister of violating his oath of office.

In this season of looting, there are looters and there are looters. Apologies to decent people from Taraba State, but it appears as if looters from that state have big hearts. I think it is in Taraba that we saw looters carting away tractors, in the full public glare.

Some pushing, some driving the tractors. In fairness, Taraba is not alone, as we saw looters, in some other states who came to the government warehouses with vehicles and motor cycles to loot.

After all, the minister is supposedly educated and urbane, unlike the looters who are uncouth, high on drugs or other similar vice, as we believe.

Perhaps, we overrate our public officials when we hold them higher in character than the street urchins and ragamuffins, who tried to make a fool of the democratic culture of street protest, the penultimate week. Indeed, it is possible that what Mamman Saleh did, is what passes off as public service in many sectors.

Could it be that self-aggrandizement and clannish interests, is what is pervading the public service, so much so that our country has bread an army of hooligans who are ready to end the life of the country in retaliation?

The opportunity to preside over the Ministry of Power, and thereby determine who gets what, which Mamman Saleh had, and grossly abused, is perhaps a mirror of the challenge we face in that sector of our nation’s life.

This column has canvased that there should be a decentralisation of the power sector, down to states, local governments and estates. If the Ministry of Power wishes to intervene in rural electrification projects, it should use states and local governments, instead of creating its own bureaucracy.

As we have seen in the case of Mamman Saleh, it could be his decision that instead of wasting scarce resources going across the country to figure out a fair deal, in accordance with the constitution, he choose to site the majority of the projects in his local government, damn his oath of office. It is possible that the honourable has never bothered to read the country’s economic objectives as provided in section 16 of the 1999 constitution (as amended).

The minister should know that section 16(1)(b) provides: “The state shall within the context of the ideals and objectives for which the provisions are made in this: control the national economy in such manner as to secure the maximum welfare, freedom and happiness of every citizen on the basis of social justice and equality of status and opportunity.

” It provided further in sub-section 2(c) “The state shall direct its policy towards ensuring – that the economic system is not operated in such manner as to permit the concentration of wealth or the means of production and exchange in the hands of few individuals or of a group.”

Perhaps the minister needs to revisit his oath of office, which is contained in the seventh schedule to the constitution. A part of which read: “… that I will strive to preserve the Fundamental Objectives and Directive Principles of State Policy contained in the constitution of the Federal Republic of Nigeria, that I will not allow my personal interest to influence my official conduct or my official decisions… so help me God.”

Without equivocation, the Minister of Power has clearly abused his oath of office, and has shown himself not different from those who have laid our country waste in the recent past. Since he would not resign having been caught red handed, and since his principal would not do anything about his conduct, the senate should diligently ensure that the unconscionable act is nipped in the board.

The senate and the House of Representatives should stand guard against similar looting under the guise of national budget.
The venomous alacrity with which families joined street urchins and vagabonds to loot both essential and non-essential commodities, from government and fellow citizens alike, show the decadent level of our society.

Perhaps, a sociological study should be commissioned, to know whether what happened represent the perception of the citizens of what the public officials do in the name of public service.

Even with the #EndSARS crisis contained, it will be playing the ostrich to think that the anger and discontentment that bred, perhaps the worst socio-economic rioting in the history of Nigeria has gone with the winds. The economic desperation and the moral decadence exhibited the penultimate week should worry our public officials, if they have the interest of our country at heart.

NBC fine: Govt should not muscle the media

NBC fine: Govt should not muscle the media