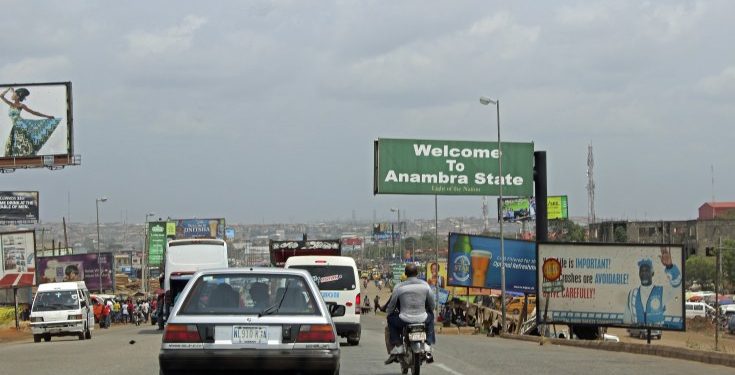 Various youths in Anambra have taken to the streets demonstrating for non violence, including killing and vandalising properties in the states.
News Echo correspondent who monitored the situation on ground in Awka reports that business premises, banks and markets, such as the Nkwo Amaenyi and Eke-Awka markets, except schools have all resumed their normal activities.

Life is said to be gradually returning to normal in different parts of the state after days of unrest caused by warehouse palliative looting in the country.
Although there were still presence of armed mobile police men, strategically positioned on areas like Term Sites, Aroma, Regina Caelis junction and the Amawbia, towards prisons, activities are said to be in top gear.

AWKA SOUTH LOCAL GOVERNMENT
Meanwhile, the Awka Youths Association has totally condemned the illegal activities of violence, destruction of public and private buildings and cultism being perpetrated by some miscreant in the city of awka.

Speaking during the tour, the vice chairman, Awka Youths Association, Mr Tochukwu Nwaokoye stated that the youths are against people looting, burning tyres on the road.
“We don’t want cultism in Awka South. The EndSARS protest is a welcome development, but not to use it as avenue for causing social unrest”.

Also speaking, Comrade Chuks Oji hinted that people should go back and focus on their businesses, rather than causing violence. He however, warned that such persons if caught will be handed over to police for persecution.

A trader, Mr. Chukwukwado Okafor, who condemned what he described as the irrational acts of some hoodlums in disguise of EndSARS protesters, said that looting and burning of property will not give solution to the course they are fighting for and will not bring peace and change to the nation.

Meanwhile, in line with the charge by Governor Obiano on cleaning up of the state, officials of the Anambra state ministry of environment and the Anambra State Waste Management Authority as well as the OCHA Brigade were seen clearing debris left by the protesting youths.
The Managing Director of Operation Clean and Healthy Anambra, Engineer Douglas Okafor, said that      Anambra State Government has always been passionate about the plights of Ndi Anambra and described the looting and destruction of government property as a threat to a peaceful and democratic Nigerian society.

AGUATA LOCAL GOVERNMENT
The call was made by the Coordinator, National Youth Council of Nigeria, Aguata chapter, Comrade Chukwuma Ezeike during a peace rally in Aguata local government headquarter against violence.

The youths were carrying various placards with inscriptions like, no to violence, no more vandalization, build the youths, build the nation, scatter the youths scatter the nation.”
However, Comrade Ezeike, advised youths to adopt a peaceful way of protest, to avoid being hijacked by hoodlums whose mission aimed at destruction of public property which may result to untold hardship.

He furter stated that Aguata youths fully support the #EndSars protest with efforts to stop police excesses, illegal arrests and extra judicial killings of innocent citizens.
Earlier, the transition committee chairman, Aguata Local Government Area, Sir. Eche Eziebe emphasised on the need for Nigerian youths to make their voice heard in order to bring the desired development to the nation, but warned that the protests in Aguata should be done in a rancour chaos free manner.

The Aguata ASATU Youth Leader, Comrade Chukwuka Otiocha who called for active participation of youths in governance, beckoned on the leaders not to deprive youths of their future, but strive to meet their demands.

ONITSHA SOUTH LOCAL GOVERNMENT.
A group known as coalition of youths in Onitsha South Council Area engaged over a hundred youths gathered at Central School Odoakpu with banners in a peaceful walk to call for peace and end to violence in the state.

The peaceful walk move down to Onitsha South Local Government headquarters, with some of their placards written “Onitsha South Youths say stop robbery and crime stop burning Anambra State, we are builders not destroyers, o “Onitsha youths say no to violence, no to fighting, no to looting, let peace reign, among others.

Addressing the youths, the chairman, Onitsha South Council Area, Hon. Emeka Asoanya warned them to stay away from violence, as it is never used to solve any problem, neither has crime.

Hon. Asoanya equally pleaded with the youths to henceforth rise and protect their community from hoodlums, whose desperate means is to cause havoc in the state.
He urged the youths and residents of the area not to be involved in vandalization of public and private property, but rather unite to restore normalcy in the area.

On his part, the mayor, Anambra State Association of Town Union (ASATU), Comrade Arinze Ifeajuna added that the voice of the youths have been heard through the ENDSARS protest.
DUNUKOFIA LOCAL GOVERNMENT
Youths in Dunukofia Local Government Area led by the Transition Committee Chairman of the Local Government, Mr Emeka Okonkwo, have staged a peaceful march across the major areas of the local government in support of the call by Governor Willie Obiano for peace, end to violence and destruction of public property occasioned by the excesses of hoodlums acting in the guise of protesters.

The youths, under the aegis of Anambra State Association of Town Unions, ASATU, Youth Wing, and other youth groups, carried banners with various inscriptions that narrated their dissatisfaction with the spate of violence recently witnessed in Anambra State in the name of ENDSARS protests, warning intending assailants to stay away from Dunukofia Local Government Area.

The Transition Committee Chairman for Dunukofia Local Government Area Mr Emeka Okonkwo, who addressed the youths before the march, reminded them of the moral and civic importance of protecting their local government, observing that Governor Willie Obiano had taken commendable step towards addressing the original issues of the protests following his address and the panel of inquiry set up to look into police brutality in Anambra State.

Addressing the youths, the Second Vice-President of ASATU, Anambra Central, Mr Rowland Akabueze and the ASATU Youth Leader in Dunukofia Local Government Area, Mr Chukwugozie Ilokolobia, noted that the ugly turnaround of the protest has sent a wrong notion about the youths, noting that the most effective approach to social agitation was dialogue.