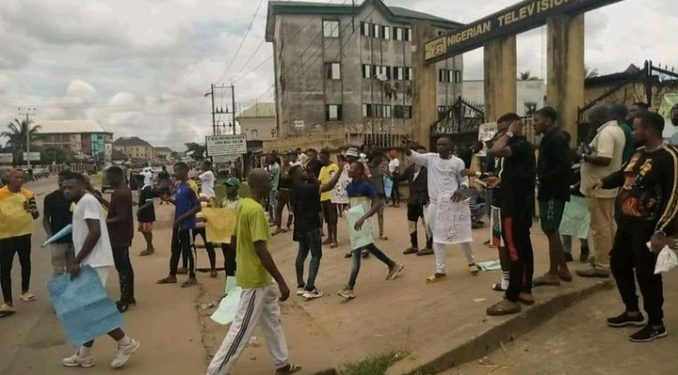 Youths and Students Advocates for Development (YSAD), a non-governmental organization on Tuesday gathered youths and students from Imo and the Abia State to begin a campaign against extortion on the roads.

The group said the campaign is aimed at educating private and commercial road users including all transport unions on traffic rules which must be obeyed to avoid unnecessary extortion. YSAD disclosed this to journalists during a press conference held in Aba, the commercial nerve centre of Abia State where it launched a campaign with the theme “No Dey Give: Follow Traffic Rules”.

The Chief Executive of YSAD, Mr. Obinna Nwagbara lamented that one of the scenes of everyday corruption and reckless display of impunity in the whole world is on the Nigerian roads.

YSAD Chief Executive said that the group is determined to use all lawful means to end the menace of extortion, harassment and other forms of abuses by security personnel on uniforms on roads as well as making their toll free lines available.

Nwagbara stressed that Nigerian roads have become where officers of various security and paramilitary formations brazenly extort and harass road users into parting with various sums for known and other undefined offences.
He said that YSAD is determined to end extortion on South East roads where motorists both private and commercial are randomly exploited just for driving on the road.

Nwagbara hinted that the group which began from the University of Nigeria, Nsukka (UNN) has been going around educating and enlightening youths and students on ideal traffic rules that must be obeyed to enable one to stand on the law and his rights.

He noted that they are presently collaborating with government agencies and members of the organised private sector and other critical stakeholders to challenge the tradition of extortion by officials paid from the public treasury.

YSAD also posited that it would engage the Nigerian Police, Federal Road Safety Corps and the hierarchy of road traffic management agencies in the states to explore ways of moving away from the current extortionist system.
The group noted that traffic management is not a platform to raise revenue either for the government or private individuals, stressing that it is bizarre that so many security agencies are now competing with proper revenue-generating agencies on who raises more money periodically.

YSAD recalled that the ENDSARS protest which engulfed Nigeria in October 2020 and threw the country into confusion was triggered by this same menace of extortion by men in uniform and warned that Nigeria does not need to experience such again to address this abnormality.

The group cautioned road users to be law-abiding, obey traffic rules and be courteous to the officers when accosted in order not to create some ground for extortion as seen presently that has turned Nigerian roads into illegal cash-points.

“The campaign shall also be vehement in opposing acts of official irresponsibility and gross indiscipline such as the recent event in Abia State Polytechnic, Aba, where an officer of the Nigeria Police Force reportedly raped an 18-year-old student, leading to protest. “We shall use tools of traditional and new media to engage in this campaign which is expected to run until June 2022. We shall also organise events starting with our Youth Summit on Human Rights and Police brutality coming up this October here in Aba.

“We shall also adopt any measure we consider legitimate and relevant in this very important campaign aimed at restoring sanity on our roads and the society at large.”