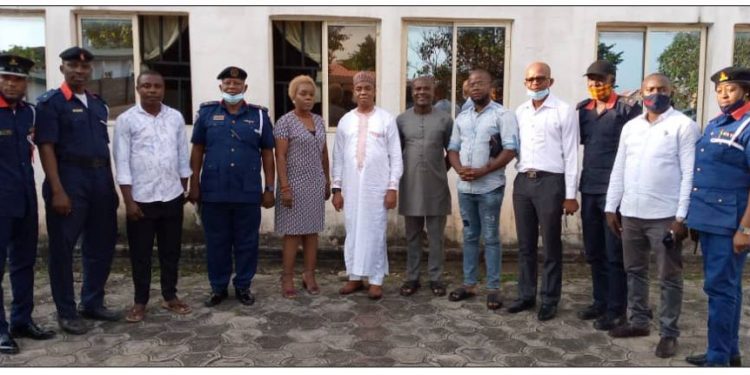 The commanding officer, NSCDC Imo State, Raji Ibrahim Adedoyin (centre) in a group photograph with leadership of PMAN, Imo State and some senior officers of NSCDC after a courtesy call by PMAN leadership on commandant

Youths numbering over 1,000 from Umuokpo community, Obingwa council area, took over Ikot Ekpene highway following the killing of their kinsman, Onyedikachi Nwaogu, by an operative of the Nigeria Security and Civil Defense, NSCDC, identified as Inspector Robinson Otobong Abel.

The youths marched with the corpse to Aba town where they were confronted by several patrol teams of soldiers and policemen. Even the efforts of the Transition Committee Chairman of Obingwa Council, Chief Kingsley Nnaji, failed to sway the youths to abort the protest.

However, they defied the security agents amidst sporadic gunshots and paraded the corpse at some media houses in the area. It was gathered that the NSCDC official attached to the Akwa Ibom State Command was accompanying some white men to Akwa Ibom State when he shot Nwaogu as the Hilux Van in which they were travelling with made to pass through his(Nwaogu’s) compound due to the dilapidated state of the Aba- Ikot Ekpene highway in the area.

But the deceased was said to have insisted that the Hilux jeep ply the Aba- Ikot Ekpene highway as his father’s compound was not a road. Residents of the community told reporters that the NSCDC official after barking at the deceased to make way, pulled his gun and shot him on the legs and fired another shot into his stomach.
After the shooting, he reportedly threw the body into the back of the Hilux jeep and fled the area towards the border with Akwa Ibom state. As they were arrested, the youths set ablaze the Hilux van while security arrested the NSCDC official and others with him.

According to the residents; “as the civil defence man saw our brother in a pool of blood and struggling for life, he threw him into the back of the Hilux jeep and their driver sped off. We raised alarm and some youths started chasing them.

They had gone past the Abia side of the border when some people contacted the military men at the Akwa Ibom end who stopped them. They would have thrown away his corpse or even brand him an armed robber. He has been shot dead by a security man without committing any offence, left his wife and four children. This is the height of wickedness.”

Imo community cut off from world -Cries for rescue

Imo community cut off from world -Cries for rescue