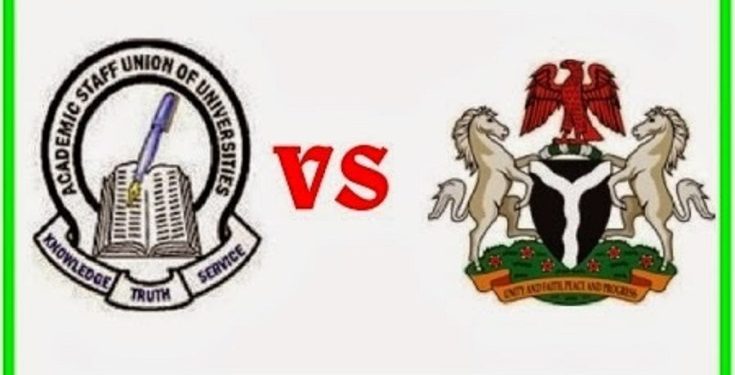 According to ASUU,it would only call off the strike when goverment do needful in the universities .
The Coordinator , ASUU Owerri zone, Uzo Onyibinama stated this on Tuesday in a press briefing held at the Nnamdi Azikiwe University, Awka, Anambra State.

He alleged that Federal Government was feeding the public with lies about the strike, stressing that the main reason for the strike was government’s inability to keep previous agreements and not about the Integrated Payroll and Information System as being propagated by the government.

He said, “For the avoidance of doubt, the issues in contention remain revitalization fund for public universities, arrears of Earned Academic Allowances , visitation to universities, proliferation of state universities and issues of governance in them, and conclusion of the renegotiation of the 2009 FGN-ASUU Agreement.

“The later issue of Integrated Payroll and Personnel Information System (IPPIS) was a new introduction and a diversion as no university in the world runs such a system.

“Instead of apologizing to the Nigerians and hiding their heads in shame on the serial failures of Governments particularly the present Government which came on the mantra of ‘change’, the duo of Ministers Chris Ngige and Emeka Nwajiuba have been feeding Nigerians with lies and half truth.

“Ministers Ngige and Nwajiuba have on many occasions on various media organizations said that agreement have been reached on virtually all the issues that necessitated the seven months old strike.

“They should please tell Nigerians, who are their masters, those agreements that have been reached and implemented. As far as our Union is concerned, no agreement has been reached on any of the demands.

“So instead of constantly running to the press, Ngige and Nwajiuba should sit down and painstakingly do the work that they are paid to do. It is on record that the date given by the Minister Ngige to reach our Union with Government improved position has elapsed without any communication.

“The proposed new timelines for implementation of some proposals such as appointment of a new team for renegotiation of the 2009 FGN-ASUU Agreement, gazetting of visitation panels among others have elapsed without any implementation. This shows the insincerity on the part of Government.

“On IPPIS, our Union has been consistent in rejecting the platform as it compromises the autonomy of the University system and a threat to national security considering that the software is hosted in Washington, USA with a sub-platform at Gombe State”