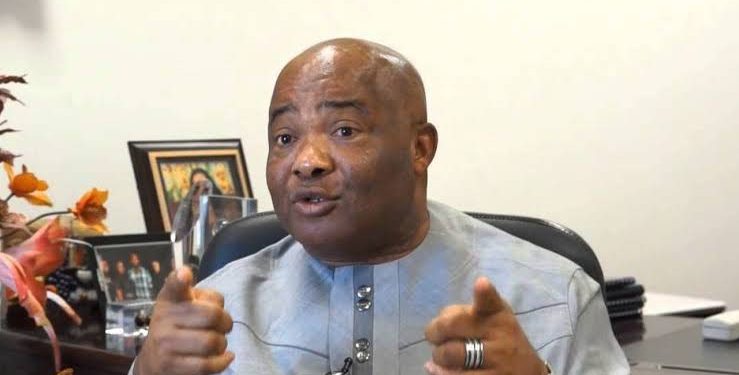 Governor Hope Uzodimma of Imo State has appealed to Seplat Petroleum Development Company to give priority to the provision of social amenities to the host communities and people where they are doing business in Imo State.

He however pledged his government’s full support to Seplat to enable the oil and gas company realize its set goals in Imo State.

Governor Uzodimma spoke both at the Government House, Owerri at the weekend, when the Chairman of Seplat, Dr. ABC Orjiakor, led a team of his top management on a courtesy call to the governor, and at Assa in Egbema local government area when he went on a facility tour of the company’s gas plant under construction.

The Governor acknowledged that the coming of Seplat to Imo and Egbema in particular, marks a new dawn as it will lead to the “provision of access roads for everybody, electricity for the communities, water for all, good health facilities for the general healthcare of the communities and Imo people in general as well as right type of education that will make the indigenes employable in their company.”

He advised the company to shun the pressure of giving the communities money in place of amenities, noting that “the days of divide and rule when a section of the community will be with the company while another section will be in the opposition thereby creating crisis that makes a host community a tenant in their own land is over.”

Most importantly, the Governor enjoined Seplat to consider, in a serious manner, the employment of the indigenes of the host communities in particular and citizens of Imo State in general, in choice positions of the company as doing so will help bring peace, harmony and create a conducive working synergy that will make the company to thrive.

While on a project tour of the company site at Assa Community, Governor Uzodimma promised that the Government and people of Imo State will ensure a very friendly and secure business environment for Seplat with the hope of reaping bountifully from the company’s Corporate Social Responsibility (CSR) to Imo people. He promised to remove legislative bottlenecks that will create difficulties in Seplat’s operation.

Governor Uzodimma requested the company to take up any of the Federal Roads in Imo State for reconstruction through Tax-Credit Scheme and apply for Tax-relief to the Federal Government, promising to use his good offices to help Seplat secure such an application.

The Governor further requested the company to patronize genuine indigenous contractors, employ as many qualified indigenes of the host community as possible and to also train and employ those not so qualified to the standard of Seplat.

He used the opportunity to once again thank Seplat for the 200-bed facility the company is collaborating with other oil firms and the NNPC to build at the Imo State University Teaching Hospital (IMSUTH) Orlu, saying that the gesture will help in the upgrade of the institution.

Earlier, Dr. Orjiakor said the facility the company is building in Imo state will generate electricity and create direct and indirect job opportunities for the people.

He said domestic gas as a source of power is always cheaper than firewood and kerosene and that what Seplat is doing in Assa will eliminate environmental hazards associated with the use of firewood and other environmentally- unfriendly sources of energy.

Dr. Orjiakor thanked the people of Assa for their cooperation so far and promised to always carry them along in their operations. He also expressed gratitude to Governor Uzodimma and pledged that Seplat will fulfill all that the governor has requested of them.

CPS/Media Adviser to the Governor

Rallying point: If Imo State is a country (1)