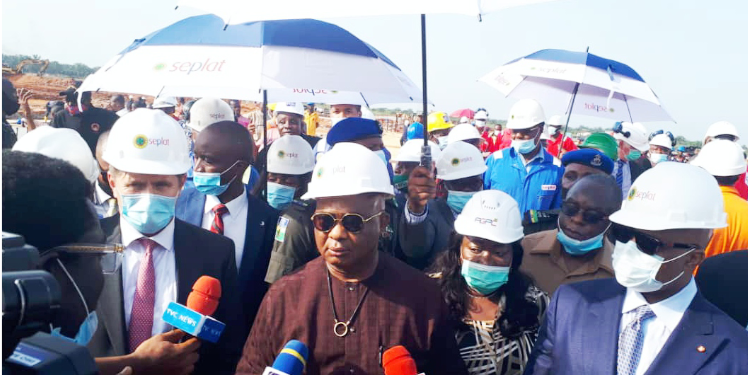 Governor Hope Uzodimma of Imo State has called on Seplat Oil company to carry out more social corporate responsibility projects in the state, describing the company as Imo’s version of Dangote.

The governor made this remark while addressing the management of Seplat who called on him at the government house to inform him of the progress of work on the ANO gas project, inviting him to pay a fact finding visit to the site.

He challenged them to consider reconstructing one or two of the five federal highways in the state which are in total state of disrepair, promising to sign an undertaking for the company to obtain tax credit from the federal government, from where it will recoup the cost of constructing the roads, adding that it was the way Dangote did in Tincan Iceland, Oshodi express road and Apapa.

He promised to create friendly, safe working environment for the company that will ensure ease of doing business.

“We want the company to show concern to our people, by embarking on social projects that will add value and increase the life span of the people”.

He encouraged the company to carry out more corporate social responsibility projects like building of hospitals, schools, construction and maintenance of roads and avoid, as much as possible the idea of cash donations which he said mostly causes crisis and brings disunity among members of oil producing communities.

“We expect that as globally recognized company, corporate social responsibility will not only be available but will be more organized and implemented in a manner that, rather than escalate and bring crisis into the communities, will reduce tension and eliminate crisis in any part of the state.

We will implore you to employ more of our young men and women who are qualified to work with this company and train those who are not qualified, so they will be qualified”.

The governor appreciated Seplat for the 200-bed hospital it was building at Imo State University Teaching Hospital, Orlu and pleaded with it to fast track action on the project

Earlier in his address, leader of the delegation and chairman of Seplat, Dr ABC Orjiako, made it clear that Seplat has been playing a strategic role in the changing oil and gas business as it is producing 30 percent of the gas to power in Nigeria and said the company was committed to the transformation of the country.

He said, having acquired the assets of Shevron in Imo State, the company went into joint venture partnership with NNPC and is investigating for the first phase, $700m dollars in the first phase of the ANO gaa project in Imo which he said will bring employment, youth development, energy solution first to Imo State, before it goes outside of the state.

The project manager Mr. Water Wellinger express hope that the project we come to fruition by next year.