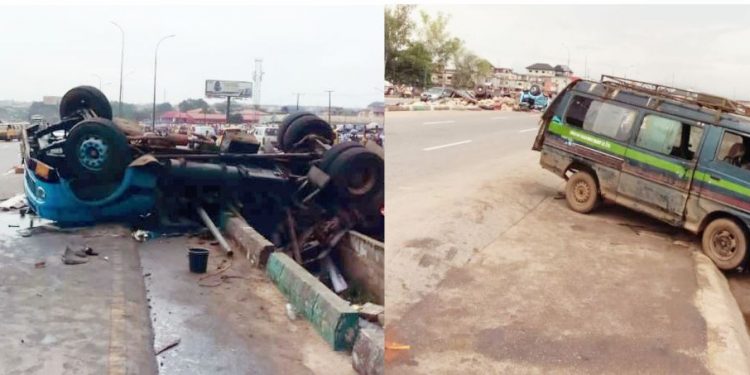 The scene of the accident along Enugu-Onitsha express way.

News Echo correspondent gathered that the accident which led to the death of the victims occurred as a result of road obstruction in which a broken down bus parked along the road without a caution sign to notify on coming vehicles.

“At about 2130hrs on Monday night of 5 October, 2020, near Coca Cola Onitsha, along Enugu-Onitsha express way, two male adults were killed in a fatal road traffic crash involving a green Mitsubishi bus with registration number, JJT 943 XA and a Mercedes Benz truck, with registration number, FGG 612 YG, allegedly occurred as a result of road obstruction by a broken down bus without a caution sign to notify the on-coming vehicles.

“However, information reaching the command states that a total of five (5) male adults were involved in the crash, (2) male adults who sustained varying degrees of injuries were rushed to Toronto Hospital, Onitsha by FRSC rescue team from Onitsha unit command in collaboration with men of the Nigerian police force, Onitsha, while the dead bodies were deposited at the morgue after doctor’s confirmation.

Obstructions which occurred as a result has been cleared and normal traffic flow restored.”
Meanwhile, the sector commander, Anambra State, C.C Andrew Kumapayi sends his condolences to the deceased family and wishes the injured victims quick recovery.
Moreso, he warns drivers of broken down vehicles to ensure adequate caution sign is displayed to notify oncoming vehicles in order avoid further crashes.

Lamenting the menace of our security outfits

Lamenting the menace of our security outfits