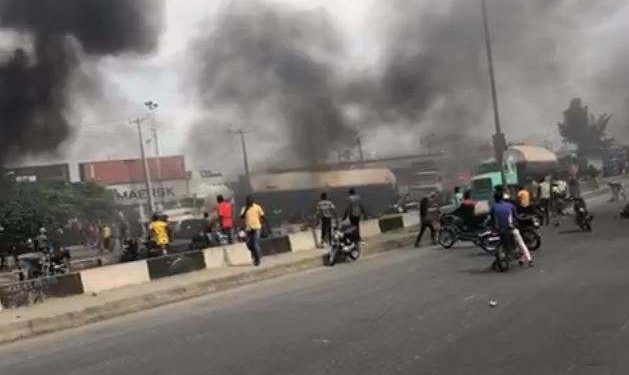 Three weeks after President Muhammadu Buhari, ordered Nigerian youths to stop protesting, noting that he has taken note of their demands, Lagos state Okada riders, Tuesday took to Apple Junction and FESTAC, Lagos state to protest against the seizure of their motorcycles by the states task force.

It was gathered that task force stormed Apple junction and seized a good number of motorcycles owned by these people struggling for survival. Irked with the display of power and of course the attitude and manner by which they (Task Force) seized and maltreated their members, a large number of Okada riders blocked Apple junction and burnt tyres and anything they could lay their hands on, making it difficult for motorists and passers-by to access the road.

Apple junction is a major road that connects Duba, FESTAC, Amuwo Odofin, Ago, Mile 2, and Express. Speaking with one of the Okada riders who pleaded anonymity, it was gathered that the alleged Task force seized a good number of motorcycles and took them to the nearest police station at FESTAC.

Getting the information, they (Okada riders) organized themselves and went after the Task force. They were reported to have stormed the station demanding the release of all the motorcycles seized. As at the time of press, every road in FESTAC had been blocked.

However, when it was investigated as to ‘why’ the sudden protest, two Okada riders, (Abu and Mohammed) said: “We are angry that the government has not responded positively to the EndSARS demands by the youths and now this.

“This is the only thing we survive with. Without our motorcycles, we will die. The bitter part of this thing is that when they seize your motorcycle, they will take it to Alausa, which in few days time if you do not come with the money they charge you they will sell it.

“Some of us are ridding this bike for someone. Some are doing ‘Higher Purchase’ while others do daily pay. “People that bought bikes yesterday for two hundred and sixty thousand naira were among those that their motorcycles were seized. “We don’t know what to do but this thing cannot continue”, they said.