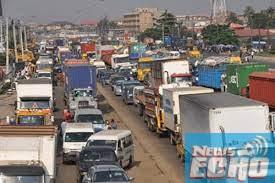 Tankers drivers over the weekend shut down the ever busy Asaba-Onitsha road in protest against the violent attack on one of their colleagues by men of the Delta State Police Command.

It was gathered that the policeman attached to Special Anti-Cult Unit (SACU) opened fire on the tanker that was loaded with fuel and heading to Onitsha. In the process two tyres were destroyed completely.

The tanker driver, joined by his colleagues and other drivers of articulated vehicles blocked the entire road in protest thereby creating a gridlock that extended to over five kilometres.

An eye witness, who spoke to our correspondent, said it happened in the wee hours of the day at about 5:00 am, the entire road was already blocked and vehicular movements stalled.

A luxury bus driver, Sunday Adah, who spoke to our reporter, said he was on his way to Enugu from Lagos but had been stalled at the point our reporter met him before 5:00 am and had waited over six hours and there appeared to be no hope in sight.

He said he heard that a policeman shot and destroyed two tyres of a tanker loaded with fuel and that led to the protest.

Investigation revealed that the policeman that shot at the tanker also sustained injury as the bullet injured his hand.

When contacted for confirmation of the event, the image maker of Delta State Police Command, DSP Bright Edafe confirmed the story but added that the Commissioner of Police, CP Ari Mohammed Ali was personally at the spot to resolve the matter and paid for the two tyres of the tanker.