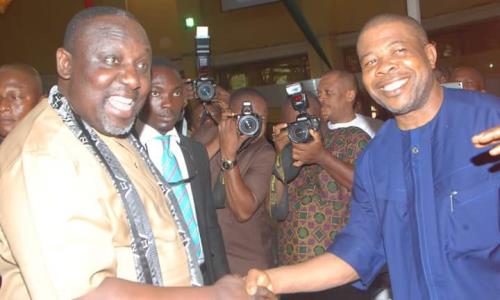 Governor Hope Uzodimma of Imo State, on Monday, October 26 at the Sam Mbakwe Exco Chambers of the state government house, held a stakeholders meeting with some leaders of Imo State from various sectors, with the main agenda being review of the EndSARS protests and the resultan violence killings and wantom destruction of public and private facilities.
Addressing the stakeholders, the governor made it clear that the protest was hijacked by some hoodlums who were sponsored by some desperate politicians

Apparently referring to Okorocha, Uzodimma said, “Unfortunately, some of us have forgotten why we spent so much to wrestle power from those who were poised to play God by their vain attempt to establish a family dynasty, with an emperor lording it over a cosmopolitan people like Imo State”.

Also surreptitiously referring to Ihedioha, the governor said, “Little did we know that the enemies of the state are not limited to those who desperately wanted to hoist a family dynasty on us, some of you are aware that the administration before us was more interested in building personal empire than catering for the welfare of the masses. I have sought without success to be shown a single project done before my arrival”.

He used the biblical story of king Solomon to buttress the fact that the past governors and their cohorts would want the state dead at all costs since they did not achieve their selfish ambitions, referring to them as false claimants to the ownership of the child, while himself as the real owner, will do everything possible to see that the child is protected.

“When I was declared as the authentic governor of the state, they sponsored protests upon protests, both in Imo, Abuja and other places. They even sponsored pensioners and civil servants to protest to create the impression that same Imo people who elected me did not want me. Now they are sponsoring hoodlums in an evil alliance with their new found friends”.
The governor made it clear that he did not find any Kobo in governmnet treasury, inspite of the fact that the Economic and Financial Crimes Commission, handed N36b to Ihedioha, from the money the commission seized from Okorocha.

He used the opportunity to reel out some of his achievements to include; first administration in history to commission seven completed road projects in seven months, modern data centre, University of Agriculture and Environmental Sciences, reforms in Imo State University, revitalization of Adapalm, Otammiri Water scheme now pumping water.
Other achievements of the administration according to the governor included; revival of the state civil service, regular payment of workers salaries, free bus service for civil servants with free breakfast, brand new vehicles to Judges and permanent secretaries, well equipped mobile clinic to the rural areas.

He further listed; the training of five thousand youths in different skills acquisition programmes, proactive response to the Covid 19 pandemic, restoration of accreditation to four nursing and midwifery schools in the state, among others.