Save our twins from dying, couple appeals to Nigerians 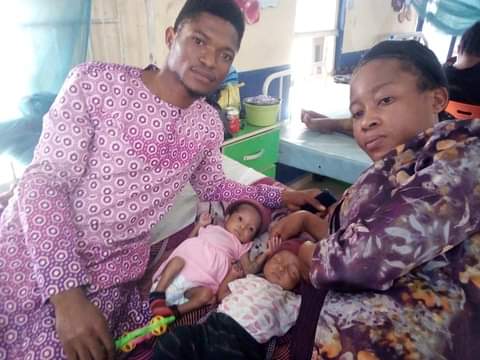 A young man, Mr. Best Nduaguibe and his wife, Anita Nduaguibe have cried out for help from good spirited Nigerians to come to the rescue of their baby-twins.

The couple, whose babies were currently on admission at Okpara ward of Federal Medical center, (FMC), Umuahia made the appeal through a SoS message to the members of the Nigerian Union of Journalists (NUJ) on Saturday in Umuahia.

They narrated that the twins, little Chiobioma and Chidiebere Nduaguibe, had been suffering from blood shortage and malnutrition which according to the couple had totally  affected the health of the babies.

Speaking with the mother of the twins on hospital bed, Mrs. Anita Nduaguibe said that she gave birth to the children on August 2020, shortly after that, she fell sick to unknown and strange sickness which made her husband (a petty trader) spent all he had to ensure she recovers.

She equally said while she was still battling in her health, her twins who could not suck her breast as a result of her sickness also fell sick a month after their birth.

Nduaguibe lamented that because they lacked money and were also from poor families and could not take care of the twins, adding that when their health became so bad by early March this year, they rushed them to FMC.

After examination, she said the doctor taking care of them said they were suffering from malnutrition in need of blood and drugs.

She commended the hospital for doing their best in keeping the kids alive but called on good spirited Nigerians to save her babies from dying.