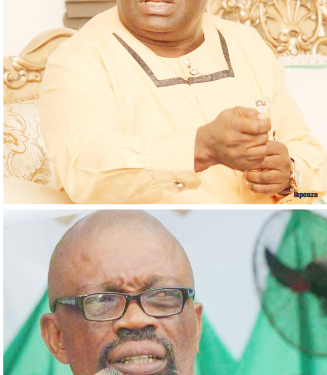 Social and political grounds were on Sunday shaken following the statement from the Abia State government announcing the suspension from office of Anthony Agbazuere (PhD), as the Chief of Staff to Governor Okezie Ikpeazu, by the Governor himself.

The statement signed by Barrister Chris Ezem, the Secretary to the State Government( SSG), read ” Abia State Governor, Dr Okezie Ikpeazu has directed the immediate suspension from office of the Chief of Staff to the Governor, Dr A.C.B. Agbazuere, thank you”, the message concluded, without giving any explanation for the sudden directive.

Unknown to many Abians, the suspension order was dished out at a time the Chief of Staff was at far away St Finber’s Catholic Church, Bende road Umuahia as a special invitee of the Church’s annual harvest.

The suspension, it is believed, stemmed from the embarrassment the State may have suffered following a vital online money spraying videos and pictures involving the suspended Chief of Staff, Agbazuere and controversial Onitsha-based pastor, Chukwemeka Ohanyerem, aka Odumeje Indaboski.

Odumeje had arrived at Abia State capital last Thursday in convoy of many cars, seized the city of Umuahia in his usual motorcade entertainment and money-spraying. This he did on some streets of the State before heading into the Abia State government House, Umuahia for a visit to the suspended Chief of Staff.

The visit, unfortunately, proved to become a terrible miscalculation for Dr Agbazuere, who until his suspension, was believed by many, to be among the strongest member of Okezie Ikpeazu’s government.

In the viral video, the Chief of Staff was seen spreading some naira notes on Odumeje who ranted his usual demonstrative slangs inside the office of Chief of Staff, even as Chief Agbazuere was seen in the picture, smiling and admiring Odumeje’s dexterity.

But on Sunday, Governor Ikpeazu, who was in far away Enyimba Stadium Aba watching the Enyimba vs Rahimo of Burkina Faso CAF African champions League match, dropped the heavy hammer on Agbazuere, believably angered by the videos brought to his attention.

As a young man working in a former regional bank in Umuahia in late 80s up to early 1990s, Agbazuere developed interest in human rights affairs, from where he later became the Chairman of Nigerian Labour Congress (NLC), Abia State chapter.

From his position as the NLC supremo, he was always at loggerheads with the military government of then Col Ike Nwosu the then Military administrator of Abia State during the regime of General Sani Abacha.
Agbazuere used his position to oppose any policy he considered inimical to the welfare of Abia State workers especially alleged harassment of civil servants by the military administrator, and this brought him in confrontation with Col Ike Nwosu.

After Ike Nwosu’s removal, Agbazuere, then a young lad was crowned the Egbe gburu Agu 1 by some section of Ngwa elders, for his courage in fighting for the workers.

It was also believed that a certain first class traditional ruler from Ngwa land, was well pleased with Agbazuere’s efforts, hence the decision to decorate his neck with the garlands of Egbe gburu Agu (The gun that killed a lion).
When Chief Orji Uzor Kalu took over the leadership of Abia State in 1999 as elected executive Governor of Abia State, Chief Agbazuere, like a socio-political gadfly, returned to the trenches, digging out some alleged offences allegedly committed by Kalu, before he became Governor.

He took his fight to the Court, through his Lawyer, the late Chief J.N.Ogbonna, whose chambers operate from Azikiwe road, Umuahia. In the affidavit he filled, Agbazuere among other things claimed that Kalu was not fit to be Governor. The case progressed to Federal Court of Appeal, Port Harcourt before Agbazuere withdrew it, after he reconciled with Chief Orji Uzor Kalu.

Kalu later capped the reconciliation with appointment of Agbazuere into his government. In Kalu’s period as a two-time Governor, Agbazuere became an important name, rising from special assistant to becoming a Commissioner for information before becoming the executive Chairman of Isiala Ngwa South LGA.

When Chief Theodore Orji fell out with his Godfather, Kalu in 2009, Agbazuere returned to the corridors of power, becoming again, the Commissioner for information, a position he held to his appointee’s satisfaction.

Journey to becoming chief of staff:
Having bagged his degree in law from Abia State University, Uturu and subsequently, Master’s and Doctoral degrees from the same institution, he had prepared the ground for a bigger role in governance and the opportunity met the aspiration after he was appointed the Chief of Staff by Governor Ikpeazu after his second term victory.

Before his appointment, the position was a coveted one, with many people interested in occupying it.
His appointment added some muscle to the Ikpeazu administration as policy formulations, execution and related matters became smoother for Ikpeazu, unlike in his first term, where the office was for most times less functional following the ill-health of the then Chief of Staff, Chief Chijioke Nwakodo, a son of Umuana Ibeku.

Many unattended files were also responded to, breathing more life into the Governor’s visions for the God’s own State. Nwakodo was hospitalized in far away London, United Kingdom for a good part of the first tenure. He later died and Governor Ikpeazu in his tribute during his burial said he had lost a good friend and a man who understood his vision for Abia State.

Odumeje’s ‘wahala’ and how it shook Abia’s political space
The office of the Chief of Staff, as understood in Nigeria and beyond, is like the engine room of every administration, no wonder many occupants have through that office, worked and warmed themselves into the hearts of their principals.

A typical example is Senator Theodore Orji, who was for 8 years, the Chief of Staff to Chief Orji Uzor Kalu from 1999 to 2007, 8 unbroken years. Orji, it was understood, was close to Chief Kalu, enabling him to shine brighter than Chiefs Reagan Ufomba, Henry Iko and other allies of Kalu. As a result Kalu, worked for Orji’s victory as Governor and the rest is now history.

This is where Chief Agbazuere, in the opinion of some political watchers, made a mistake of his political career. The visit of Pastor Odumeje, they say, is not bad but what was inimical was the display of the Chief of Staff, as seen in the videos and pictures where he sprayed money on the controversial cleric.

This opinion is predicated on the surface that even if the visit of Odumeje was a private one, the meeting still took place at the Office of the CoS, and as such, a brazen display of that nature should not have taken place. Another uproar generated by the videos is the claims by some workers in some State-owned parastatals that they were owed months of unpaid salaries and entitlements.

So, the implications, may have informed Governor Ikpeazu to take his Sunday decision, at least to differentiate his administration from any misbehavior of any of his appointee. This action also enforced the credibility of the Ikpeazu’s government in the eyes of many people as government a responsible and responsive government.

However, the main opposition party in Abia, the All Progressive Congress (APC) in reaction to the development said it was not satisfied with the suspension of the Chief of Staff, demanding that he deserved outright sack.

The party in a message through its publicity, Mr Benedict Godson said the action of the top government official was a slap to workers in some State-owned parastatals being owed salaries. The APC spokesman’s statement read in part “We have been complaining about the irrationality of the officials of the PDP-led administration but people don’t understand.”

He continued “What the Chief of Staff to Governor Okezie Ikpeazu did was a huge slap on the faces of Abia health workers and other government workers that are being owed backlog of salaries. He should be sacked with his sack letter made public”, Abia APC spokesman, said on Sunday in reaction.

Also, another group which called itself Save Abia group in statement signed by their chairman, one David Chukwumerije on Mobday, threatened to hit the street of Abia in protest if Dr Agbazuere is recalled by the Governor. The group also claimed that the suspended CoS was making plans to return to office.

Why Agbazuere may bounce back as COS:

Having become an important part of governance in the present administration of Abia, it may not be a surprise if Dr ACB Agbazuere regains his position. This point is drawn from the fact that no administration toys with its best hands, no matter the shortcomings of those involved.

Agbazuere is a master strategist and this you cannot take away from him. This sagacity has enabled him to work with the three civilian administrations ranging from Orji Uzor Kalu to Theodore Ahamefula Orji and now, Okezie Ikpeazu and one may wonder the special aura his contributions breeze into the engine of the vehicles of those he serves, which makes the journey smooth for them.

A close source in Government quarters told this paper that Agbazuere is seen as an engine room, hence the need to return him to power, whenever the brouhaha of Odumeje visit fade’s away.

The source however regretted that the misapplication of social media handles has ruined many political and social personalities around the world, blaming the problem on some young staff of the Chief of Staff’s office, which according to the source, may have uploaded the sleazy video without the consent of their boss.

Another factor that may bring back the embattled CoS is the interest of the Ngwa nation to take another shot at Governance, in 2023. Agbazuere, it is believed, working as the Chief of Staff till 2023 will sustain the stability of Ikpeazu’s government in completing several projects he has embarked upon, and also maintain the chances of politicians of Ngwa stock vying for the Governor again, in 2023.

Just like Ikpeazu recalled two LGA Chairmen of Aba North and South Chief Victor Ubani and Hon Cherechi Nwaogu respectively in November, it is also the discretion of the State Chief executive to recall his CoS or finally sack him.

However, the timely and courageous step he took in handling the brouhaha has salvaged the image of his government. If he eventually regains his office, Agbazuere must have learnt his lessons to manage his office properly, so as to avoid a future slip.

But if he doesn’t return, it will also serve as a lesson to all leaders in the country, especially those aspiring for elective positions that it is not enough to get power, but to manage it well remains another challenge.