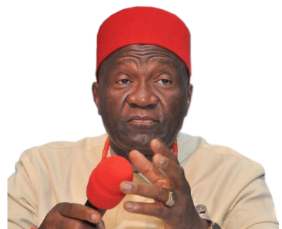 For some time now since the tenure of the current leadership of Ohanaeze Ndigbo under the Presidency of Hon. Nnia Nwodo began, there have been a plethora of comments, views and analyses regarding who would emerge as the next president general of Ohanaeze Ndigbo.

In a brief historical retrospect of Ohanaeze, at the end of the civil war in 1970, the Igbo nation was in disarray due to the outcome of the civil war which invariably did not favor those on the side of Biafra. The Federal Government had as part of the end of the war marshaled out the principles of 3R’s: Reconciliation, Rehabilitation and reconstruction as part of the recovery agenda of Federal Military Government.

As the Igbo acquiesced to this package, their implementations were not visibly favorable to the Igbo nation. Besides some measures taken by Gowon’s Military Government during the war had robbed the Igbo nation off some of the privileges and benefits accruable to them as members of the Federal Republic of Nigeria.

In order to find their fit in the nation’s socio-political, socio- Economic and Social-Cultural environment, some courageous Igbo leaders began a process of coming together in order to speak with one voice to find a common ground. This process metamorphosed into the Igbo National Assembly (INA). Unfortunately due to apparent suspicion by the Federal Military Government, the organization was banned by the Federal Government.

However, their aspiration did not die with the ban hence in 1976, an organization known as Ohanaeze Ndigbo was formed with its objectives to foster unity among its members in order to enable them better represent, protect and advance Igbo interest within and outside Nigeria. Ohanaeze has local, state and regional branches in Nigeria as well as national and regional branches in Diaspora.

Although in its forty years of history, it has undergone series of challenges but in spite of these, it has managed to fumble and wimble to some type of stability. Obviously, the Igbo nation has a lot of qualities to commend it but there are so many in built turbulent characteristics which tend to water down the cohesiveness and the strength of the Igbo nation.

For example, since the creation of Ohanaeze Ndigbo, one must say without fear of contradiction that by the special grace of God, the organization has enjoyed relative peace which began during the presidency regime of the last president Ambassador Ralph Uwechue.

Now in obvious characteristics of Igbo race, so many people have shown interest to become the president General of Ohanaeze. One thing which Ohanaeze leadership has succeeded in doing is to formulate a process of rotational presidency among Igbo core states; Abia, Anambra, Delta, Enugu, Ebonyi, Imo and Rivers States.

For the next president, it is a turn of Imo State. Although there are about twenty (20) persons showing interest, those on the front line are Joe Nworgu, the current Secretary General of Ohanaeze, Prof. Chidi Osuagwu, , Chief Chris Asoluka, a seasoned management consultant, Prof. George Obiozor, a renowned diplomat and many others.

Many were expecting that next year’s election of the Ohanaeze will be devoid of the usual cantankerous tendencies. It was heading that way until a couple of weeks ago when a kind of virus was blown into the wind. It was announced that the Imo Chapter of Ohanaeze with the support of the state Government held a meeting and adopted Prof. George Obiozor as its candidate for the president General of Ohanaeze Ndigbo come 2021.

This announcement which may be regarded as a bubble burst sparked up a lot of bad publicities and name calling for those who participated in such activity. As an Igbo scholar and an articulate one at that, it is my considered opinion that the selection of George Obiozor was not properly done. Obviously, one of the problems which Ohaneze had and continue to have is the interference of Governors of the states that constitutes Ohanaeze.

If we recall, before Ralph Uwechue’s demise as the President General of Ohanaeze, there were some ripples brought about by some spasmodic support of Ohanaeze by the former Governor of Enugu State in the person of Chime Sullivan by not providing Ohanaeze the much support it needed and this led to major and minor crises that saw Uwechue as President and Nduka Eya as the Secretary General.

I have always argued that as long as State Governors continue to provide major finance for the administration of Ohanaeze so much will the leadership of Ohanaeze be at the whims and caprices of these relevant governors. Of course as the saying goes, “He who pays the piper will always dictate the tune” and this weakens the strength of Ohanaeze leadership to a kind of stooge to the state Governors.

For example, why many are opposed to the adoption of George Obiozor is because of the apparent involvement of the State Governor in his alleged adoption. It is not difficult to see the link and this is part of what is irritating the entire populace. For example, the present Governor of Imo State Dist. Sen. Hope Uzodimma is a smart person who believes in the willing and dealing in the political process.

Although he is a generous politician who many people allege knows how to give unrejectable gifts once he wants something. In fact, the involvement of Chief Emmanuel Iwuanyanwu the chairman of Elders Council further aggravated the onslaught against the adoption of George Obiozor as the President General Ohanaeze. Indeed, it was a bad business.

Another angle to the onslaught is that fact that the political domination of Imo politics by Orlu has become a thing of great concern to the entire populace of Imo State to the extent that people are asking, “Why Orlu person again?” personally as an intellectual and a political scientist, I am not against George Obiozor and his so called adoption as President General but his sure make me think that since Joe Nworgu and Chris Asoluka is from Owerri Zone and are good candidates with Prof. Chidi Osuagwu who is from Okigwe Zone, wise counsel should have prevailed to allow this three persons from different zones- Owerri and Okigwe zones respectively vie for the post of the Ohanaeze president General.

Anybody who will frown at this line of thinking should have asked why the Governor did not promote the emergence of any of the aspirants that are not from Orlu Zone. If he had done that, the uproar which George Obiozor’s representation raised I bet wouldn’t have risen. Much as I strongly believe that any Igbo person with sound experience to the management of public affairs would have become the president of Ohanaeze Ndigbo, but such a person should be well grounded in the intricate affairs of the Igbo populace.

Indeed, George Obiozor is a globalist and not a traditionalist who may not be embedded in the socio-cultural politics of the Igbo nation. In fact, his interest in the Ohanaeze President General came to many as a surprise. For years he has been operating at a global level and one will believe that his leadership of the Ohanaeze will be at the whims and caprices of Imo State.

On the other hand, Joe Nworgu from Ngor Okpala who has been the Secretary General of Ohanaeze Ndigbo has learnt the role of Ohanaeze Ndigbo complexities. He is a sound Cambridge scholar. Those who have interacted with him know that he comes across a noiseless achiever.

Equally, Prof. Chidi Osuagwu from Obowo Local Government of Imo State by all stretch of imagination is a local champion when it comes to traditional and cultural niceties of Igbo land. A well grounded scholar, who thinks, breathes and lives in the Igbo thoughts.

Furthermore, Chris Asoluka from Owerri West Local Government of Imo State is a very careful human being who has achieved a lot for the Igbo nation through consultancy and development economy. It is my considered opinion that if the Government of Imo State throws his weight behind any of these three that are not from Orlu, his sponsorship will accrue a lot of interminable tradability.

Why do I say so many may ask. I said so because I know Nnia Nwodo comprehensively well. He is not a person to be influenced or enticed with any type of gift. I worked with him when I was a MAMSER Director and his younger brother Okwesilieze Nwodo was elected the first civilian Governor in Enugu. He is a sound intellectual from the University of Ibadan.

He is not a mundane person. He is from a formidable family of political genealogy with clean record of upbringing who has seen a lot of wealth and wealthy things. His father Chief Nwodo was one of M.I Okpara’s ministers. Therefore, announcing in advance the type of parting gift that will be given to him smacks of poor intelligence.
To the best of my knowledge, what will be of great importance to Nnia Nwodo is a legacy of the election of President General that will continue his legacy of rebuilding Ohanaeze Ndigbo. To him, that will be more lasting gift.
In conclusion, I strongly posit that Joe Nworgu, Prof. Chidi Osuagwu, will be a good choice and are each eminently qualified to be the President General of Ohanaeze Ndigbo.

Indeed, after all, all animals are equal but some are more equal than the others. We want a peaceful election for the emergence of the next President General of Ohanaeze Ndigbo because the position of the President General has a lot of cultural limitations.

Sunny Uma-Imo media under jackboot or pocket of government