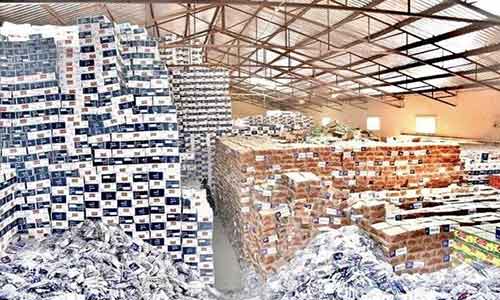 The Socioeconomic Rights and Accountability Project (SERAP) has asked the Presidency and the Independent Corrupt Practices and Other Related Offenses Commission (ICPC) to investigate alleged hoarding of COVID-19 palliatives in states.
The demand followed videos showing discovery and haul off of food items in storage facilities.
States affected include Cross River, Edo, Ekiti, Kwara, Kaduna, Lagos, Osun, Plateau and Taraba.
In a petition to Bolaji Owasanoye, ICPC Chairman, SERAP called for prompt and effective prosecution of anyone suspected to be responsible if there is relevant and sufficient admissible evidence.
The petition dated October 24, 2020 was signed by SERAP’s deputy director, Kolawole Oluwadare.
Itse Sagay, Chairman of the Presidential Advisory Committee Against Corruption (PACAC), was copied.
The rights group recalled that Nigerian authorities asked people to stay at home as a protective lock-down measure.
It lamented that they failed to discharge responsibility to timely, effectively, and transparently distribute palliatives to ease the hardship faced by the poorest and most vulnerable people.
“Tracking, monitoring and ensuring COVID-19 palliatives are timely, effectively, and efficiently distributed to those most in need would improve transparency and accountability, respect for human rights, as well as remove the possibility of political considerations or bribery in the distribution of the palliative”, SERAP noted.