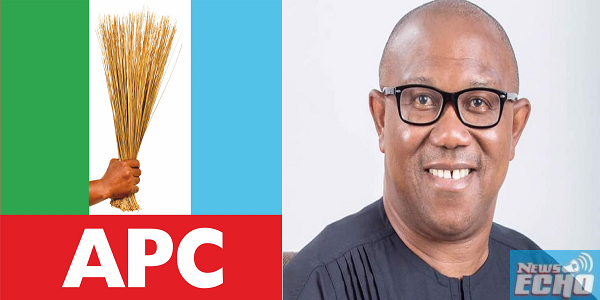 The recently issued manifesto of the Labour Party’s 2023 presidential candidate, Peter Obi, contains “fallacies and misleading figures,” according to the All Progressives Congress (APC).

Bayo Onanuga, the Director, Media and Publicity of the APC Presidential Campaign Council (PCC), stated in a statement on Tuesday that Obi’s manifesto is a poor replica of the current APC-led administration of President Muhammadu Buhari.

Over the weekend, Obi unveiled his 62-page manifesto. The manifesto, titled ‘It is Possible: Our Pact with Nigerians,’ was based on seven themes: security, production, institutional reforms, the industrial revolution, infrastructure development, human capital development, and a strong foreign policy.
However, Onanuga, in the statement, said, “After perusing the document which is very high on graphics and demagogic rhetorics and short on substance, we have come to the conclusion that the document is empty and vacuous.”

“The document which is titled offers nothing refreshing to Nigerians and comes across as total anti-climax. The subtitle ‘Action Plan’ was shamelessly parroted from Asiwaju Bola Tinubu’s manifesto.

“One of the fallacies contained in the document, which Obi has often repeated to his followers, is that Nigeria is a failed state. We wonder whether the Labour Party candidate sometimes bothers to check the meaning of a failed state and whether the country he dreams to govern falls into the mould of Yemen or Somalia, where institutions of government have lost total control of their societies,” the statement added.

The APC PCC also stated that Obi’s policy proposal shown him to be “ill-prepared for the mammoth challenge of running a country the size of Nigeria.”
Obi, a former Anambra State governor with a big young following, is running for Aso Rock’s top post in 2023 alongside APC’s Bola Tinubu and Peoples Democratic Party’s Atiku Abubakar (PDP).

Major surveys have placed Obi ahead of Tinubu and Atiku, but the days leading up to the February 25, 2023 presidential election remain tense.