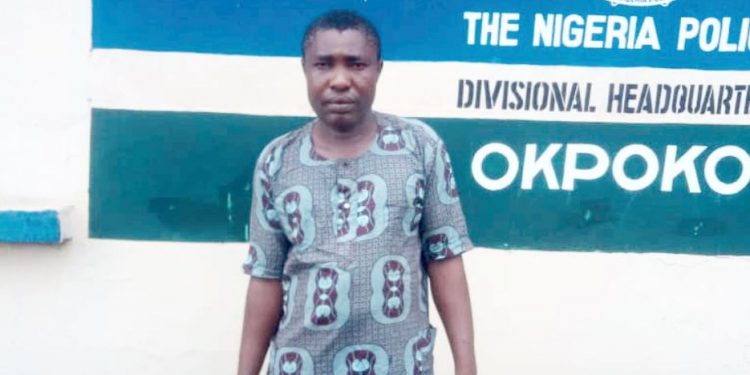 The suspect, Ejike Kanu who had carnal knowledge of 7 year old girl

A 33 year old man who hails from Elugwu Mkporo in Ohafia Local Government Area of Abia State and simply identified as Ejike Kanu has been arrested by the Police operatives attached to Okpoko division, Onitsha for allegedly having carnal knowledge of a 7 year old girl in his wife’s shop.

The suspect, who resides at Umuobom street Okpoko, lured his neighbour’s daughter inside his wife’s shop where he committed the abnormal act.

“Suspect allegedly lured his neighbour’s daughter, aged 7 years and had unlawful carnal knowledge of her inside his wife’s shop”.

However, “Police detectives visited the scene and took the victim to hospital for medical examination where penetration was confirmed by the medical doctor.

“The suspect has voluntarily confessed and attributed his action to devil’s influence.

“Meanwhile, the case would be transferred to the State Criminal Investigation Department for discreet investigation as directed by the Commissioner of Police, CP John B.Abang, fdc after which suspect will be charged to court for prosecution” the press release concluded.

Ebonyi Airport to be ready December 2021