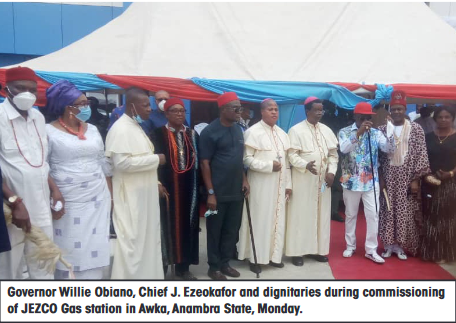 0
SHARES
127
VIEWS
Share on FacebookShare on TwitterShare on Linkedin

He commended the Chairman of the company, Chief J. Ezeokafor for heeding his ‘Aku Luo Uno’ call and investing in the state.

The governor attributed high influx of investors into the state to the wonderful security architecture and relative peace that exist in the state and laudable infrastructure built and ongoing in the state like the Anambra airport project.

He submitted that most businessmen in Lagos and other places in the country have concluded plans to relocate to the state because of security and other policies that enhance ease of doing business and therefore called on others who are yet to decide, to do so and invest in the state.

In his remarks, the Chairman of JEZCO Group of Companies, Chief Ezeokafor thanked Obiano for providing the enabling environment for businesses to thrive in the state.

He recalled that his firm formerly used Adamawa State as its headquarters but is relocating to Anambra because of what he described as good business policies entrenched by the Obiano administration.

Ezeokafor reminded the governor that he had opened an oil blending plant at Agu Awka which employed hundreds of people and therefore thanked him for coming to inaugurate the new service station.