No police officer should die while bearing riffle – IGP 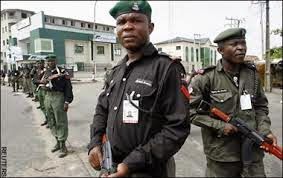 The Inspector General of Police (IGP) Muhammed Adamu has reminded police officers that they are expected to defend themselves with their riffles at the extreme cases of attack, when no other means is available, adding that no Police officer should allow himself to be murdered while bearing his riffle.

The Inspector General of Police made this assertion while addressing personnel of Imo State Police Command at the state police command headquarters, near Imo State Government House, Owerri, during his inspection/fact finding visit to the state.

During the visit the IGP paid a courtesy visit to the Governor of Imo State, Senator Hope Uzodimma at the Government House, Owerri, addressed Imo Interim Management Committee Chairmen, traditional rulers, town union executives, community vigilantes and other relevant stakeholders who were having a two day security summit at the Imo State Council of traditional rulers secretariat, Mbari street, Owerri.

He also paid inspection visit to Orji and Nwaorieubi Police Stations; two of the police stations completely burnt down by hoodlums during the violence that preceded the EndSARS mayhem. He also paid a visit to injured police officers at the Federal Medical Centre (FMC), Owerri.

He made it clear that hoodlums hijacked the EndSARS protests and used the opportunity to unleash mayhem on the police and commended the police officers for being professional and not allowing themselves to be provoked into using extreme force.

The police boss promised to do the best for those police officers who were injured in during the attacks and families of those who lost their loved ones, adding that the injured police men will be promoted to the next rank, while other policemen who were due for promotion will also receive their promotion before the end of the year.

He reminded them that President Muhammadu Buhari has approved an improved salary package for them and applauded them for their resilience in the face of the demoralizing incident and for occupying the public space and not allowing the hoodlums to take over.

IGP Muhammed also appreciated Governor Hope Uzodimma of Imo State for his commitment to rebuild the police stations burnt down by the hoodlums and to take care of the hospital bills of the injured police officers.

Earlier in his address, Imo State Police Commissioner, (CP) Isaac Akinmoyede described the IGP’s visit as; timely, historic, purposeful and inspirational, saying that they were humbled by such unparalleled commitment to the well-being of the officers and men of the state command, which was expressed by his visit.