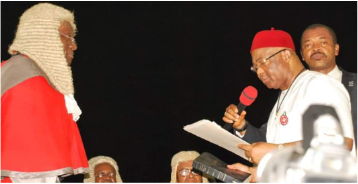 The Cable online newspaper comprehensively gave account of how the Supreme Court ousted Rt. Hon. Emeka Ihedioha and installed Senator Hope Uzodimma. At the end of the day, the Supreme Court announced Uzodimma winner of the Imo State governorship election with over 100,000 over balloting from the disputed 388 disputed polling units. All round Nigeria, the Supreme Court ruling really shocked the entire Nigeria and beyond.

‘The Supreme Court nullified the election of Emeka Ihedioha of the Peoples Democratic Party (PDP) as the governor of Imo State. The apex court declared Hope Uzodimma of the All Progressives Congress (APC) as the winner of the March 9 governorship election in the state.

‘In the unanimous judgment of the seven-member panel, read by Justice Kudirat Kekere-Ekun, the apex court agreed that results in 388 polling units were unlawfully excluded during the collation of the final governorship election result in Imo State. Justice Kekere-Ekun said with the results from the 388 polling units added, Mr Uzodimma polled a majority of the lawful votes and ought to have been declared the winner of the election by the Independent National Electoral Commission, INEC.

The judge did not provide the details of the new votes scored by each of the candidates after the addition of the results from the 388 polling units. Consequently, she voided and set aside the declaration of Mr lhedioha as the winner of the 2019 governorship election in the South-East state.

The court ordered that the certificate of return wrongly or unlawfully issued to Mr lhedioha be immediately withdrawn by the Independent National Electoral Commission (INEC) and a fresh one issued to Mr Uzodimma as the elected governor of the state. “Vote due to the appellant Senator Hope Uzodimma and the APC from 388 Polling Units were wrongly excluded from scores ascribed to the appellant(to them),” the justices ruled.

“It is thereby ordered that the appellant votes from 388 Polling Units unlawfully excluded from the appellant vote declared shall be added and that the first respondent, Emeka Ihedioha, was not duly elected by a majority of lawful votes cast at the said election.

His return as the elected governor of Imo State is hereby declared null and void and accordingly set aside. It is hereby declared that the first appellant (Mr Uzodimma) holds the majority of lawful votes cast at the governorship election held in Imo State on March 9, 2019.

The justice said Mr Uzodimma has satisfied the mandatory constitutional requirements to be declared governor. “It is hereby declared that first appellant, Senator Hope Uzodimma, is the winner of the governorship of Imo State held on March 9, 2019. “The certificate issued to the first defendant (Mr Ihedioha) is hereby withdrawn. “It is hereby ordered that the certificate of return shall be issued to the first appellant, Senator Hope Uzodimma, forthwith and he should be sworn in as the governor of Imo State,” she ruled.

The Court of Appeal on November 19 had affirmed the victory of Mr Ihedioha as the governor of Imo State.
A five-member panel of the court led by Oyebisi Omoleye delivered the judgement following the appeals filed by the Action Alliance, All Progressives Grand Alliance and the All Progressives Congress challenging the election of the governor.

The appellants had argued that Mr Ihedioha did not obtain the constitutionally required one-quarter of the votes cast in at least two-thirds of the 27 local government areas of the state, as provided under Section 179 of the Constitution.

The appellants, therefore, asked the court to set aside the decision of the election petition tribunal and declare them the winner of the election or in the alternative order a rerun.

The three appeals
The three appeals filed against the judgment of the Imo State Governorship Election Petition Tribunal, which upheld the election of Mr Ihedioha, include that of the All Progressives Grand Alliance (APGA) and its candidate, Ifeanyi Ararume; Action Alliance (AA) and its candidate, Uche Nwosu and that of the APC and its candidate, Mr Uzodimma. The different appellants asked the Court of Appeal to void the election of Mr Ihedioha on grounds that he did not obtain the constitutional one-quarter of the votes in at least two-thirds of the 27 local government areas of the state, in line with Section 179 of the Constitution.

In their various submissions, through their counsel, they asked the court to set aside the decision of the tribunal and declare them the winner of the March 9 governorship election or in the alternative order INEC to conduct a fresh election into the office of Governor of Imo State.

The three-member panel of the tribunal had in a unanimous decision delivered on September 21 held that Mr Ihedioha was lawfully declared the winner of the governorship election by INEC.

The panel led by Justice Malami Dongondaji had in the judgment dismissed Messrs ArarAume, Nwosu and Uzodimma’s petitions for lacking in merit on the grounds that they failed to prove the allegations made in their petitions.

Apart from claims that Mr Ihedioha did not obtain the constitutional one-quarter of the votes in at least two-thirds of the 27 local government areas of the state, in line with the provisions of the law, the petitioners had also alleged substantial non-compliance with the Electoral Act and Guidelines, including other irregularities.

But the tribunal in its judgement held that the case of the petitioners was unmeritorious because they failed to call relevant witnesses and that evidence of witnesses called were based on hearsay.

The tribunal, in addition, rejected documents tendered by the petitioners in support of their claims on the grounds that those who led evidence in the documents were not the makers of the documents.

In his appeal, Mr Ararume urged the appellate court to upturn the decision of the tribunal on the grounds that the lower court erred in law when it arrived at the decision that his case and that of his party lacked merit and accordingly dismissed it.

The appeal which was predicated on 22 grounds was argued by his lead lawyer, Awal Kalu, while that of Mr Nwosu and AA, was argued by Niyi Akintola. That of Mr Uzodinma and APC was argued by Damian Dodo.
They all urged the panel to allow the appeal and grant all the reliefs sought by the appellants.

However, the lead counsel to Mr Ihedioha and the PDP, Onyechi Ikpeazu and Kaham Ejelam respectively, urged the court to dismiss the appeals for being incompetent and lacking in merit.

In a surprise move on Tuesday, Mr Nwosu withdrew his appeal, through his lawyer, Solomon Umoh.
He withdrew the appeal based on a December 20 Supreme Court ruling that he, Mr Nwosu, was not a validly nominated candidate for the election.

The respondents in the matter, including Mr Ihedioha and the PDP, did not object to the application of Mr Nwosu to withdraw his appeal before the apex court.
Consequently, the court dismissed Mr Nwosu’s appeal.

Ahead of today’s judgment, controversial catholic cleric, Ejike Mbaka, had prophesied that the Supreme Court verdict would see would lead to Mr Ihedioha losing his position and Mr Uzodimma replacing him.

The Controversial 2019 election
INEC had declared Mr Ihedioha
INEC said Mr Ihedioha polled 273,404 ahead of his closest rival and candidate of the Action Alliance, Uche Nwosu, who the electoral body said scored 190,364 votes.

Mr Nwosu is the son-in-law of former Governor Rochas Okorocha who strongly backed his candidacy. Mr Nwosu lost his own case from the election petition tribunal to the Supreme Court.

The former polled 114, 676 while the latter polled 96,458. A total of 70 candidates representing various political parties took part in the election.

Mr Ihedioha is the first of the governors elected during the 2019 governorship elections to be so removed.
Even now, the governor is still fighting the stigma of being called a “Supreme Court Governor”.
It’s being speculated that the enactment of the new Administration of Criminal Justice Law (ACJL) is to silence opposition especially those that tag Uzodimma as “Supreme Court Governor”.

Man of the year