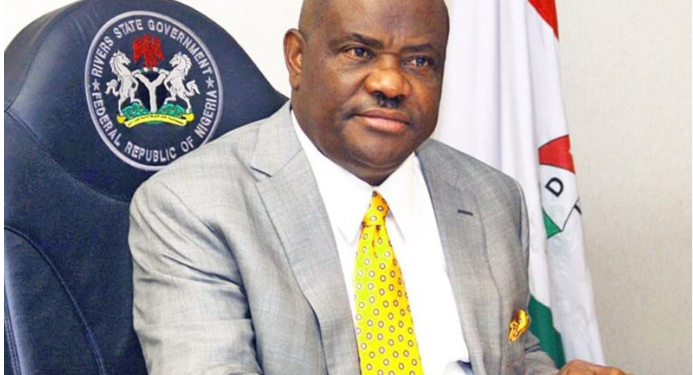 Governor Nyesom Wike is a man of dual character – he spanks you with his left hand and pampers you with his right hand. Wike roars like a lion when poised for a battle and equally has the tender leaning of a lamb taken to the slaughter slab.

The Rivers State governor possesses the persuasive candour of an aggressive marketer even as he is endowed with the elegant charm of a progressive politician.

Love him, hate him, Wike takes a stand on any burning national issue. He does not look like a wolf in the night and turn to a sheep in the day – this is not a part of his dual characterization.

Winning the 2015 governorship election was not going to be an easy task for Wike, not after then President Goodluck Jonathan and PDP had lost the presidential election to retired General Muhammadu Buhari’s APC. There were fears that APC would claim Rivers given the fact the exiting governor, Rt.Hon. Rotimi Amaechi, had pitched his tent with APC. Against all odds, Wike triumphed. That victory was well celebrated.

Taking overpower from an opposition’s chief, Wike toed the path of honour. He completed almost all the projects commenced by his political enemy predecessor. This action was applauded by all and sundry. Besides, he equally started his own projects cut across the three senatorial zones of the state.

He constructed new roads and rehabilitated old existing ones. Wike built new primary and secondary school classroom blocks and repaired dilapidated structures. He also embarked on healthcare matters and delivered. His leadership tentacles touched on commerce, industry, sports and other sectors. In fact, Wike has completed sixth bridge in Port Harcourt and this has earned him the nickname, The Bridge Builder!

Indeed, as a bridge builder, when it was time to commission those projects, Wike invited Nigerians of all walks of life to perform the ground-breaking ceremony. For instance, he invited the Sarduana of Sokoto, the governor of Sokoto, the deposed emir of Kano; deputy president, former governor of Ekiti State, former governor of Anambra State and PDP’s deputy presidential candidate in the 2019 election, to commission some of the projects. Within that period, Wike’s name was at everybody’s lips as a great performer.

In view of his largely recognisable giant strides in the area of road reconstruction, the Federal Government repaid Rivers State Government about N78bn it used to refix the various roads federal government roads.

In the run-up to the 2019 governorship election, Rivers State was tipped not just as an enclave for grabs by the APC, it was also marked as a flashpoint corner. At a time within that autumn, Wike raised the alarm that operatives of DSS had been deployed to Rivers for election manipulation.

He therefore insisted that the director of DSS in the state must be removed. That was not the only battle Wike fought before the election in 2019. He also queried why security operatives should invade into supreme court judges’ homes in the guise of ‘searching’. After said done, he stood down the almighty federal might and got re-elected.

In his second coming, Wike has been demonstrating supersonic courage and commendable capacity for performance. First, he was one of the few governors who publicly condemned the activities of herdsmen; he spoke against ruga, condemned the excessive loans the President Buhari is taking from China. During the COVID-19 -19 outbreak, Wike worked assiduously to ensure that Rivers was not severely attacked by the dreaded pandemic.

However, the Rivers number one citizen is nonetheless a man with skeleton in his cupboard, if recent developments in the state is anything to go by. Starting from the pandemic era, Wike, perhaps, went against humanity and humanities by demolishing an economic and social centre – a hotel building, on the grounds that the business never adhered to covid-19 protocols. Shortly after the pandemic lockdown was eased, Wike, probably to counter Amaechi’s claims that the Igbo speaking areas of Rivers are real Igbo, took to the streets singing and drumming that ‘we are not Igbo.

There are no Igbo people in Rivers as indigenes. Surely, Wike made old wounds flesh. He practically but inadvertently re-echoed what Diette Spiff, Isaac Adaka Boro, Albert Horsefall, Elechi Amadi, Ken Saro Wiwa and few others had proclaimed in the past: Rivers is not Igbo and there is no Igbo indigene in Rivers! As a matter of fact, most of them normally say “we are Igbo speaking, not Igbo people”.

Political analysts have pointed out that Wike was only trying to play politics. Reason is traced to the fact that Amaechi is going about all over the country telling all who can listen that he is Igbo, and so, if the 2023 presidential candidate is for the Igbo, surely, he can be considered because he is Igbo. To disprove Amaechi, Wike is saying, “no, we are not Igbo”.

The Rivers Igbo identity ripples hardly settled than the Oyigbo massacre reared its ugly head. As disturbing as the alleged killings of army officers was, no person expected that Wike would put it at the thresholds of IPOB. He said IPOB was behind the killings of army officers in Oyigbo. To that effect, he banned IPOB in Rivers State, maintaining that the Biafra agitating group was a proscribed body as it was labelled a terrorist set. After Wike’s outburst against IPOB in Oyigbo, gruesome killings have been going on in that area and nothing meaningful is done to stop the killings of innocent Nigerians, particularly Ndigbo.
Certainly, the current happenings in Oyogbo have blighted Wike’s high political profile because, for once, he never toed the path of the masses and it is unfortunate.