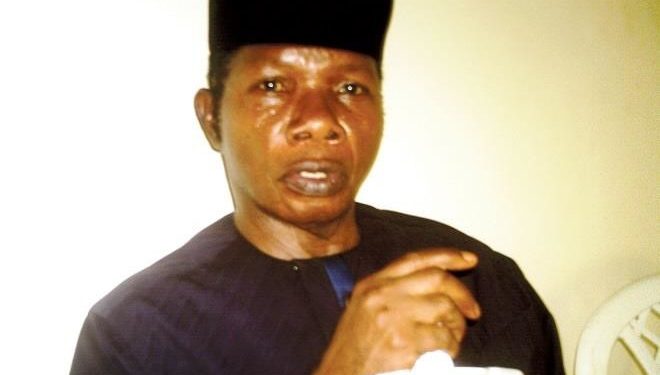 The former military administrator of Delta State, Air Commodore Luke Ochulor has proffered solution on how the federal government can tackle the insecurity in the north of Nigeria,

The Mbaise chief made the views known in a telephone chat with News Echo Tuesday while expressing concern on the kidnaped students of a secondary school in Katsina, which number has been variedly put at 333. He reacted thus:

“The federal government has allowed Boko Haram to take control of the North. The people fighting there are not small groups. There is the Islamic State of West Africa (ISWA), the Boko Haram- initiators of the violence, the dreaded ISIS which only the United State could dislodge from Iran at a time

“The inability of Nigeria to know their foreign allies outside Africa makes it more difficult. I must acknowledge that the Nigerian military are trying but it is worrisome when the invaders are attacking with sophisticated weapons and in all boldness because they don’t care.

“I suggest and I have said so before that Nigeria should declare emergency in the whole of North East and North West. We should do mass recruitment and fight this war to end it once and for all. Even if it means using a beehive (swarm on them), possibly evacuate the villages at the immediate border, take control of the place. This may take six months but that is the only way out. There is no need pretending about anything.”

Ochulor dismissed any allegation of complicity on the side of government on religious ground following the inability of government to root out the invading forces in spite of the huge budget expenditure on security.

In his words, ‘I don’t believe it, Nigerians are experts in other people’s business, I don’t believe in speculations. The problem is that we have not realized the import of the activities of terrorists, the bandits. Look at our rating as the third most terrorized country in the world. Look at our population of over 200 million people.

We cannot afford to joke with the lives of Nigerians. So I state again that the best is to declare emergency in the North East, North West, bring in military officers to command those areas for the time being, after the war the politicians can continue their business.”

On the reported lack of concern of President Buhari who visited his cows rather than commiserate with the situation, he indicated that Nigerians don’t face reality, “even if the president goes there is he the one going to fight the bandits? Nigerians are playing politics with people’s lives. I insist that there should be mass mobilization of Nigeria’s able bodied men and fight them up to the Niger.

He said that he suspects that the people we call bandits are Boko Haram. According to him, BH is members of ISIS and ISWAP.”
He dismissed those in other regions who do not show concern over what is happening in the north because according to him following modern military operation, the distance from there to any other part is not far.

On what needs to be done in stemming further spread of the violence and killing, he said it is in the emergency mass mobilization of able bodied men. It is not that the soldiers we have to call a spade by its name.

In response to a question on the effectiveness of the new strategy of mass mobilization when the people are not trained, he said that they would be trained; they are not the ones leading the fight.

Said he, “If you have group of soldiers who cover every inch of that area it would be impossible for BH to fight. Look at the world war, no amount of bombing can win the war. Physical presence of the army is required to win the war. We do not have yet the capability to bomb everywhere minute by minute till everything is turned into ruins.”

He expressed the view that Nigeria should have allies to support it to clear the challenge and not enough to just procure military aircraft or hard ware from America or Russia citing the manner Americans came here through a neighboring state to rescue its citizen quietly and without issue. He took a swipe on those managing the president’s media and advised them to stop attacking criticisms.

In his words, “those handling president’s information are not properly trained to do so, the way they talk doesn’t show that they know their job, every time they are answering off the shelf. When Nigerians are talking they should listen and analyse the situation and take appropriate action. It is about the security of Nigeria and not political party”.

Army clashes with gunmen in Aba… many feared dead

Why Pantami must go