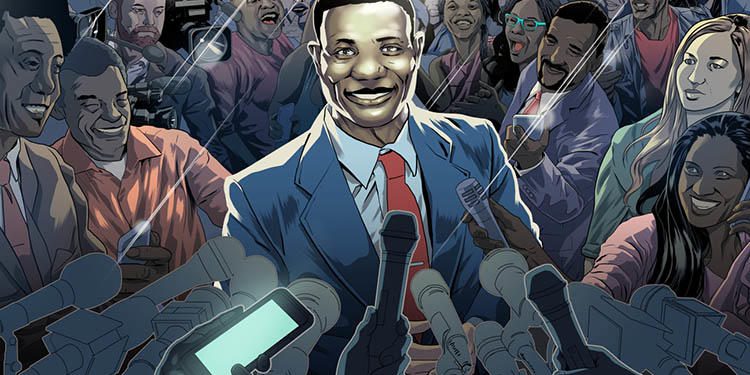 Former Regional Editor of Vanguard newspaper, Emeka Mamah, has alleged that he narrowly escaped death last Monday in his country home, Imufu, in Igboeze North Local Government Area of Enugu State.
Mamah, now the Publisher of an online newspaper, Southeast Post, said the incident occurred when two men, whom he suspected to be hired assassins confronted him at about 8.30 pm while trying to enter his house.

The hired assassins, he said, hit him severally on the head until he fainted along the road before they escaped, thinking he was dead.
He told News Echo on his hospital bed that he had crossed the road to buy some shaving sticks in an adjacent shop and was coming back to the house when the hoodlums who had apparently been trailing him tried to snuff life out of him.

Also in a three-page petition to the Enugu State Governor, Ifeanyi Ugwuanyi, and the State Commissioner of Police, Ahmad Abdulrahman, through his lawyer, Joseph Onuh, Mamah alleged that the traditional ruler of the community, HRH, Igwe Remigius Attah has placed his life under threat since he opposed him for alleged fabrication and forging of signatures of the principal members of Imufu Community in a constitution which brought him into power.

The petition by the lawyer read in part, “That Igwe once instigated the funeral procession of our client and other notable members of Imufu Community that are still alive to the extent that the matter went to police Zone 9 in Umuahia subsequent upon which the Igwe wrote an undertaking to be of good behaviour sometimes in February, 2017.

However, when contacted for his reaction, the traditional ruler said he is innocent of all the allegations.
“The present trouble started when the President General (PG) of the community, Lawrence Mamah, brought a document and asked me to sign.

The monarch said, “He told me that the tenure of the present chairman of the Neighbourhood Watch has elapsed and that another election was due. I refused to endorse it because I was not consulted. I told him that we have to discuss it in our general assembly and decide the clan that should produce the next chairman of the watch group.
“I approached the elders’ council on the matter to inform them that it was the turn of Onaje to produce the next chairman of the watch group but I met resistance. They told me that Onaje has all the juicy positions in the community and that another clan should be given the opportunity to head the security outfit. I told them that Umuossai held all the key positions in the past and nobody resisted them but they refused to listen to my explanations.

He added that he called him to convey his message of sympathy when he learnt of the ugly development, adding that he couldn’t have attacked him from Lagos State where is doing his business at the time of the incident.

Meanwhile, the matter has been referred to the state Police CIID for proper investigation.