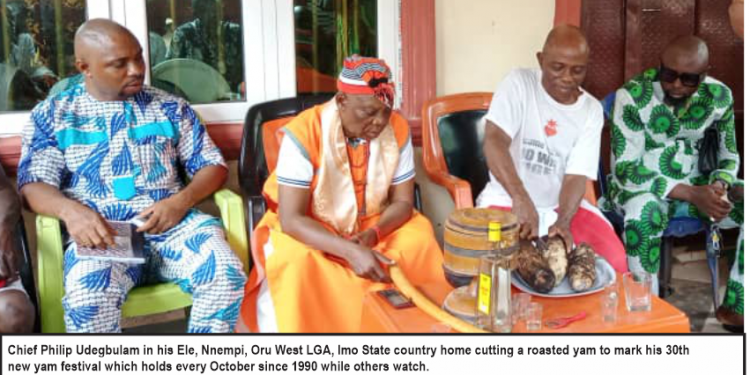 0
SHARES
61
VIEWS
Share on FacebookShare on TwitterShare on Linkedin

Udegbulam who is a traditional medicine man also used the occasion to highlight the importance of culture among the people which he described as something that bonds a people together.

He explained yam as the king of crops among Igbo people citing its celebration as one of the important cultural festival.

Udegbulam also known as Ezenwata 1 of Nnempi held that three important things in Igbo land that is highly revered include Ji (yam), Ofo (symbol of authority) and Oji (kola nut) and that underscores the importance accorded yam in the scheme of things.

The highlight of the event was the cutting of one of the three roasted yams which was later served in a local wooden dish with sauce and to the applause of guests who thronged the occasion.
In his words, “I have kept faith with this ceremony since 1990 and this is the 30th year. I am grateful to the Creator”

Speaking at the occasion as a special guest, Nze Remigius Ugochukwu, (Iyi na eri egbe) of Egbuoma, Oguta gave a historical account of the origin of the new yam festival which he traced to the Ahiajoku. He enjoined Igbo people to uphold their culture and cherish it.

Ugochukwu observed that new yam festivals are usually accompanied with life animals of either goat or cow which must be killed to appreciate the gods.

A life band was on display to entertain the crowd while many masquerades was on hand displaying their show and dancing away to the satisfaction of people. Foods and drinks were served generously to guests.

People from different parts of the country including security operatives graced the occasion and received gifts of calendar and other items.

How we helped Anambra save 100m in losses to Ghost schools, workers – Hon Azubogu