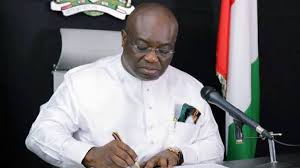 In an effort to strengthen the stability of Abia State University, Uturu, Governor Okezie Ikpeazu has constituted a seven man visitation panel for the school.

The governor in a statement signed by Barr Chris Ezem, the Secretary to the State Government, (SSG) on Wednesday October 5 announced the appointment of the seven man visitation Panel, headed by Chief J.U.K Igwe (SAN)

The visitation Panel is to be inaugurated in due time by Governor Ikpeazu. They are to look into litany of challenges confronting the schools in recent months.

It would be recalled that the members of Academic Staff Union of Universities (ASUU) of the school, led by Dr Vic Nkemdirim and other unions had on two occasions, alleged that they were abandoned to fate by both the management of ABSU and the Abia State Government.

The state government in response, announced the donation of N400m to the school to help offset its financial challenges, though Dr Nkemdirim of ASUU and his colleagues disproved the report.