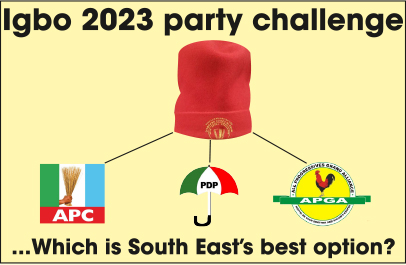 The South East leaders are also at a crossroads on which political party to pitch their tent as political activities for the 2023 general election unfold. There are currently two prominient political parties, the ruling APC and the opposition group, the PDP. In the South East, APGA is also a strong force.
APC
The APC is the party in power at the centre. Since the party came into power more than seven years ago, the majority of Nigerians, particularly, Ndigbo, are of the opinion that APC has been doing well.
Despite the presence of big shots like Senator Rochas Okorocha, Governor Hope Uzodimma, Senator Orji Uzor Kalu, Senator Chris Ngige, and several others in the zone, Ndigbo have yet to accept the broom party in the enclave.
What is more, the ruling party with President Muhammadu Buhari as the commander in chief, has denied Ndigbo almost all what are due to the Igbo nation. For instance, the railway projects all over Nigeria were not embarked in Igbo country. Buhari has established three military hospitals and none in the south East. There are 14 security chiefs but none is Igbo. Just recently, eight justices were promoted to supreme court and there was no Igbo presentation. Thus, Ndigbo may most likely not go the way of APC. In 2015 and 2019, Ndigbo never looked the way of APC. And it may still go that way in 2023.
PDP
All the way from 1999, the South East zone has always been very comfortable with the PDP. The PDP produced five Igbo presidents of the senate, two PDP secretaries, two chairmen of PDP.
The party built three federal universities in Owerri, Alvan Ikoku Federal College of Education, FUNAI. With PDP, Ndigbo had an army chief, General Azubuike, first since 1966, an inspector general of police, Ogbonnaya Onovo. During the PDP administration, Ndigbo were secretary of the Nigerian Pilgrims, director general of the sovereign wealth fund, Chidi Orji, permanent secretary, Abuja municipal, secretary to the federal government of Nigeria, Anyim Pius Anyim.
Even the two police zones in the South East now in Umuahia and Anambra came through PDP. It was the PDP government of then President Goodluck Jonathan that upgraded the Akanu Ibiam Airport to an international status. For Ndigbo, PDP is a lesser evil than the APC that has excluded the zone from national affairs. According to a published report, almost all Igbo people, apart from the professional politicians, are inclined to the PDP. You can see that the PDP has more members in the state and national assemblies.
APGA
The All Progressives Grand Alliance, APGA, both in concept and philosophy, is an Igbo creation. APGA is Igbo all and all. It was founded by Chief Chekwas Okorie and made popular by Dim Chukwuemeka Odumegwu Ojukwu when he was the party’s presidential candidate in 2003. Ojukwu made APGA really an Igbo party. Igbo youths rallied round him. The first victory was Peter Obi as Anambra State governor. Over the years, Okorie was removed and Chief Victor Umeh took over. Umeh did his best but he only succeeded in making it strong in Anambra. Now Victor Oye is in but he not up and doing. APGA is Igbo party but not well managed.